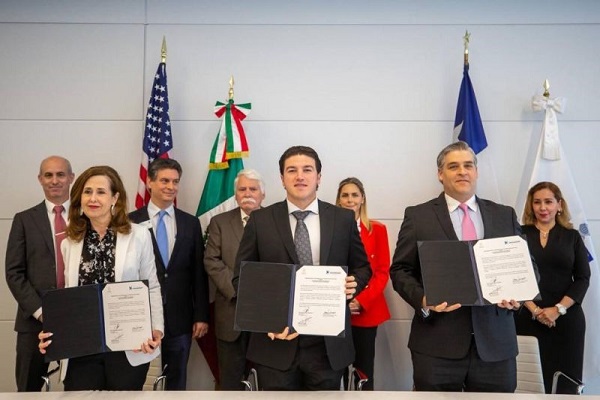 The Nuevo Leon State Government visited the Partnership this week in an effort to strengthen the relationship between the two regions, focusing on further developing their energy, logistics, life sciences and technology ecosystems. The visit comes on the heels of last month’s successful economic development trip to Mexico led by Houston Mayor Sylvester Turner, Houston First Corp. and the Partnership.

Nuevo Leon Governor Samuel Garcia, Secretary of Economy Maestro Iván Rivas Rodríguez, and General Director of the Corporation for the Development of the Border Zone of Nuevo León Dr. Marco Antonio González Valdez all participated in a luncheon where they discussed infrastructure proposals and the state’s thriving economy.

Gonzalez introduced Nuevo Leon’s plan to modernize Port of Colombia, referring to the project as priority for Governor Garcia’s administration. The Port of Colombia stands as the only international bridge directly connecting Texas to Nuevo Leon and ranks No. 3 of total US-Mexico customs federal tax collection. Gonzales discussed plans to maximize the port’s activity, noting advanced talks to reactivate a railroad to the border town. He also said establishing a cargo airport and promoting strategic relocations of exporting factories are key objectives for the administration

Secretary of Economy Maestro Iván Rivas Rodríguez discussed the Nuevo Leon economy, led by the capital Monterrey, which accounts for 92% of the state’s population. Rodriguez highlighted Nuevo Leon’s business competition and workforce, noting it generates 7.8% of Mexico’s GDP despite the state accounting for only 4.6% of the country’s population.

Rodriguez shared other economic factors, concentrating on the state’s foreign direct investment (FDI) records. According to the secretary, with $921 million USD of FDI in Q4 2021 the state of Nuevo Leon ranked #1 in the country, accounting for 24% of Mexico’s total FDI.

Rodriguez also emphasized the state’s recovery from the pandemic and business sectors. “We are not only recovering…we are doing much better,” Rodriguez said.  “We are ready for companies and people to come and have a soft landing in Nuevo Leon.”

Governor Garcia discussed the importance of the Port of Colombia project, placing an emphasis on tax revenue. “Imagine what we can accomplish with our people…[and] with a good port.”

Learn more about Houston’s global business ties and register for the Partnership’s International Business Month events - a celebration of Houston's thriving international ties and our position as one of today's great global cities.

For the first time in more than a decade, Texas is home to the most Fortune 500 companies in the nation, and Houston is now home to the largest concentration of Fortune 500s in the Lone Star State thanks to several recent headquarters relocations.Â  The 2022 Fortune 500 list ranks the largest corporations in the U.S. by revenue for the 2021 fiscal year. Twenty-four companies on this yearâs list are headquartered in metro Houston, with 21 of those based within the city limits. Statewide, 53 companies made this yearâs list.Â  The 2022 list marks the first time that two Fortune 500 firms, NRG Energy and Hewlett Packard Enterprise (HPE), were counted in Houston's column. NRG announced in May 2021 that it would relocate its headquarters from Princeton, NJ to Houston. HPE completed its headquarters move from San Jose, Calif. to the Spring area earlier this year.Â  ExxonMobil, which ranks No. 6 on the Fortune 500 list, announced earlier this year that it would move its corporate headquarters from the Dallas area to Houston. That move is not expected to be complete until 2023 and the company remains in the Dallas count in this yearâs list.Â  Among states with the largest concentration of Fortune 500 companies, New York fell to No. 2 on this yearâs list with 51 companies after seven years at the top. California was No. 3 with 50 companies.Â  A total of 97 Texas companies made the expanded Fortune 1000 list this year. Forty-three of those based in the Houston area.Â  Below are the Houston-area Fortune 500 firms and their respective rankings.Â  No. 29 Phillips 66 No. 70 Sysco Corp. No. 77 ConocoPhillips No. 88 Plains GP Holdings No. 89 Enterprise Products Partners No. 123 Hewlett Packard Enterprise No. 133 NRG Energy No. 135 Occidental Petroleum Corp. No. 170 Baker Hughes No. 193 EOG Resources No. 203 Waste Management No. 216 Targa Resources No. 223 Kinder Morgan No. 233 Cheniere Energy No. 241 Halliburton Co. No. 273 Group 1 Automotive No. 285 Quanta Services No. 320 Westlake No. 410 Huntsman No. 414 CenterPoint Energy No. 431 APA No. 460 KBR No. 481 Academy Sports and OutdoorsÂ  No. 486 Southwestern Energy See the full Fortune 500 list.Â
Read More