One Houston Together: Member Spotlight on Bank of America’s Efforts to Advance Underrepresented Talent 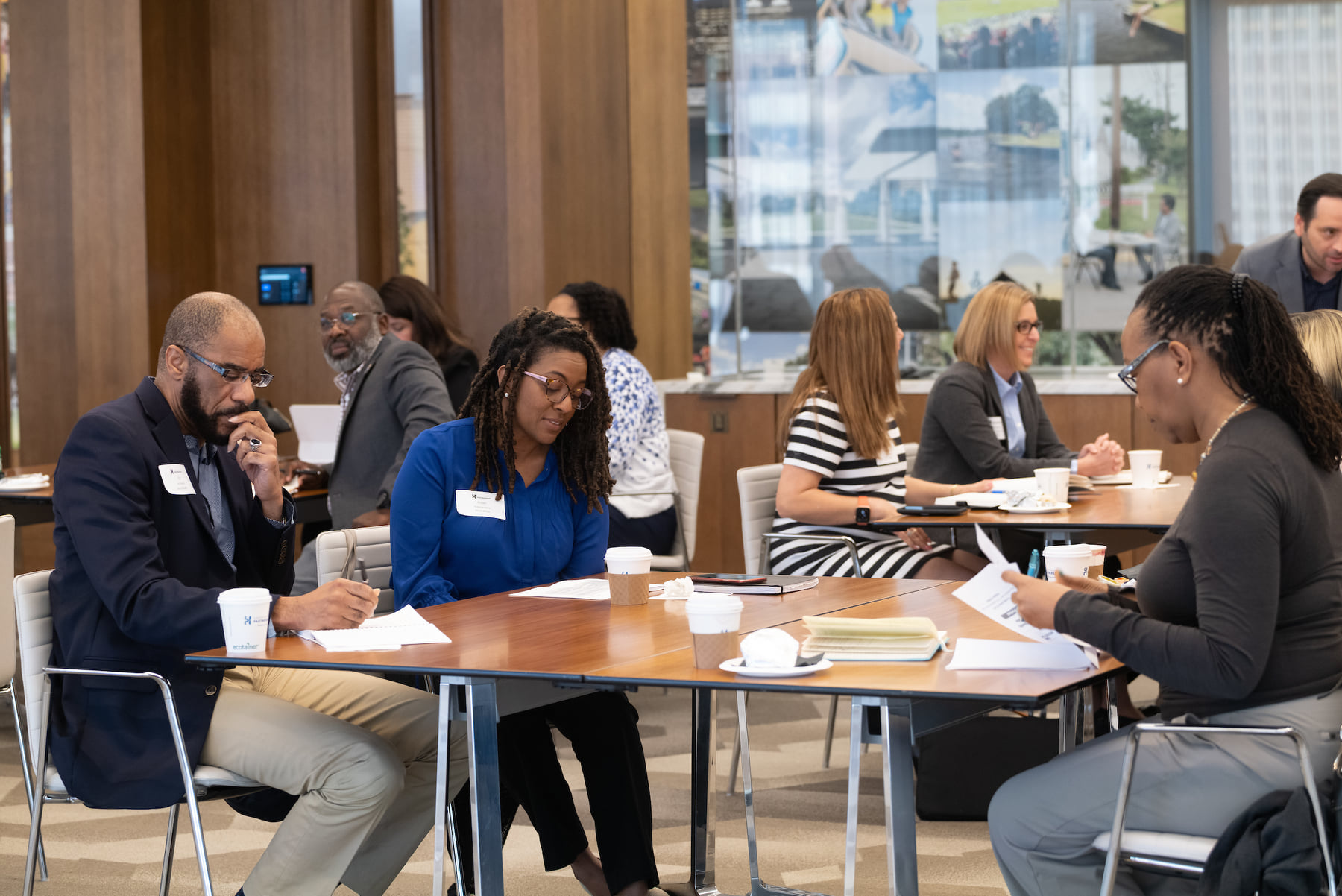 As part of its ongoing effort to showcase success in the retention and advancement of Black, Indigenous, and People of Color talent, the Partnership’s One Houston Together hosted its latest roundtable discussion in July featuring a conversation with Tiffany Douglas, Global Women’s Initiative and Under-represented Talent Strategy Executive with Bank of America.

Increasing racial equity in the corporate talent pipeline and board leadership is one of the two priorities of One Houston Together alongside increasing spending with Minority Business Enterprises. The roundtable discussions are designed to share best practices and showcase Partnership members that are leading change.

Here are several key takeaways from the conversation with Tiffany Douglas at Bank of America.

Learn more about One Houston Together and read about other case studies.

A total of 120 companies participated in Houston’s first Regional Equity &amp; Inclusion Assessment in 2021, establishing a baseline for where companies stood on a set of 15 key DEI benchmarks. The assessment is based on the Global DEI Benchmarks and provides an internal roadmap for DEI planning and progress. Through the Partnership’s One Houston Together efforts, we will conduct the assessment again in 2023 to offer companies an opportunity to gauge their individual progress and to learn how the business community is collectively progressing on DEI.  As companies prepare to complete the assessment this spring, Partnership member and global consulting firm Accenture worked with One Houston Together to create an Implementation Toolkit to support organizational progress. The toolkit focuses on 7 of the 15 DEI benchmarks and includes a set of 20 recommendations to drive strategy and attract and retain people.  Foundation: Drive the Strategy  1. Vision  2. Leadership 3. Structure Internal: Attract &amp; Retain People  4. Recruitment 5. Benefits 6. Compensation  7. Flexibility  View the presentation. During the November One Houston Together Talent Roundtable, Tiffany Wallace with Accenture Strategy &amp; Consulting presented the toolkit and discussed how it can be used to help companies determine areas of focus.  The collaboration with One Houston Together and creation of the toolkit is part of Accenture’s social impact work, which also includes the development of apprenticeship programs and working to prepare students for the jobs of the future to address the anticipated talent gap and skills shortage.  “Accenture is committed to building more opportunities for more people and fostering a culture of equality internally and within local communities,” Wallace said.  Accenture is also partnering with local historically black colleges and universities to create pathways for students into the field of technology to address the lack of Black talent in the sector.  Wallace said DEI progress is often slow, even among more progressive organizations. “For Accenture it wasn’t a quick and easy journey,” she said. “I joined Accenture in 2014 and I can honestly say that I feel l can bring my true self to work each and every day. I see diversity around me every day which wasn’t the case when I first joined.”  View highlights of the toolkit here. The 2023 Houston Region Equity &amp; Inclusion Assessment will be open from April 1-June 1, 2023. Data from January 1-December 31, 2022 should be used to complete the assessment. View the assessment questions in this fillable PDF and review findings from the 2021 assessment here.
Read More

One Houston Together: Realizing Opportunity in Supplier Diversity

The first installment of the Partnership’s new One Houston Together webinar series focused on Opportunities in Supplier Diversity, offering insight from a new report on the impact of minority businesses in the region and perspective from a local energy company that’s launched a successful supplier diversity program.  LaTanya Flix, Senior Vice President, Diversity, Equity and Inclusion at the Partnership, moderated the discussion and gave an overview of the structure and key objectives of One Houston Together as well as the definition of supplier diversity and its significance to our region. Ziba Mehra, Director of Purchasing, Calpine shared a corporate perspective on establishing a robust supplier diversity program.  Ingrid Robinson, President, Houston Minority Supplier Development Council (HMSDC) discussed trends and  MBE growth in the Houston region.   Roel Martinez, Vice President Research at the Partnership shared findings from the recently released Minority Business Enterprise (MBE) Economic Impact Analysis, produced in collaboration with HMSDC.   Here are a few key takeaways from the conversation:  Growing spending with minority business enterprises is one of two priority areas of One Houston Together. Flix shared that the supplier diversity workstream includes a Supplier Diversity Roundtable that meets 4-5 times a year, as well as a newly established Houston Buyer Cohort and a Chief Procurement Officer (CPO) Convening. “We have one big goal: to help make Houston one of the most equitable and inclusive business communities in the country,” Flix said.  Martinez highlighted key findings of the recently published Houston MBE Economic Impact Analysis. MBEs are defined as businesses that are at least 51% owned, managed or controlled by Black, Hispanic, Asian Indian, Asian Pacific or Native American individuals. The report found that:  771 certified MBEs are operating in metro Houston across 18 different sectors, with the largest number in professional services.  The vast majority of these companies are operating in the business-to-business arena and nearly half have revenues of $1 million or more annually.  Collectively these companies reported revenues totaling $8.2 billion in 2020.  Correlations between revenue and employee counts and industry sector, race and revenue. While the report focused on data from 2020, Robinson said HMSDC is seeing significant growth in the number of certified MBEs, which totaled 850 companies at the end of last year. And while most of the newly launched businesses are in the professional services sector, there’s also growing diversity in the sectors represented, Robinson said. “I definitely see more growth happening this year as well, including more interest in places like energy transition where there’s a lot of excitement.”  Robinson said the largest opportunity for growth is in what’s called the middle market or secondary supplier space where prime suppliers working with large corporations can develop partnerships with growing MBEs. “We have aggressive near and long-term goals,” she said, adding that Houston is well positioned thanks to its diversity and robust business community to set the standard for the nation.  Robinson reminded the audience that while many MBEs are small businesses, that doesn’t mean they lack capacity or are unable to meet the demands of major purchasers. Capacity is often among the leading concerns of companies beginning a supplier diversity effort. “It’s one of the mind shifts we have to make,” said Robinson.  HMSDC recently launched a new tool designed to help area companies find qualified MBEs for their purchasing needs. The Diverse Business Finder website allows companies to search for suppliers by category, location, keyword and more.  Mehra with Calpine discussed the energy company’s effort that launched in 2020 to significantly increase spending with minority businesses. With buy-in from senior leadership and a structured approach to developing metrics and goals tied to the program, Calpine’s supplier diversity efforts resulted in several award nominations. “Running a successful supplier diversity program requires a strong commitment and dedicated resources,” she said. “Engagement and communication are definite keys to success.”    Learn more about the work of One Houston Together.
Read More