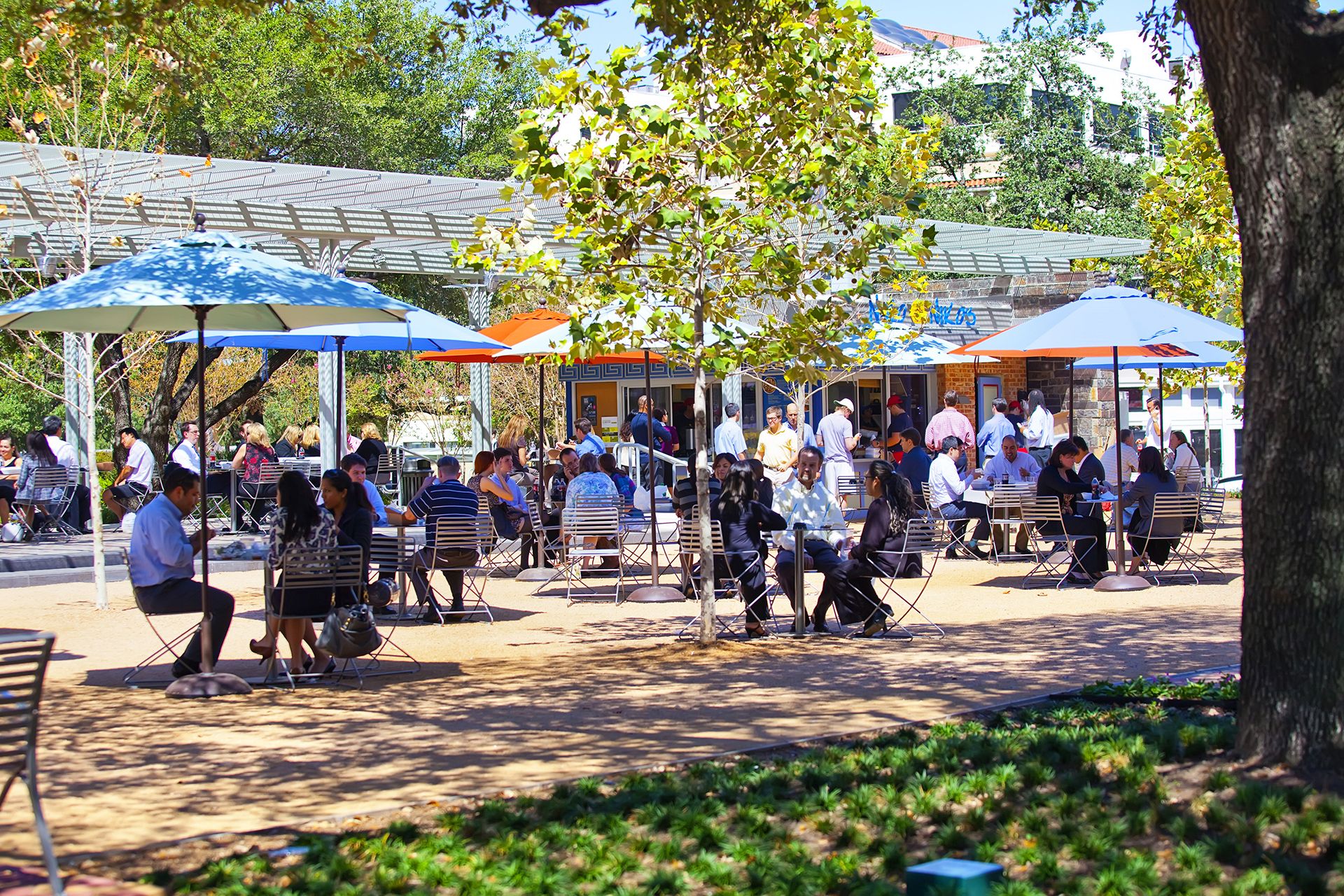 HOUSTON (August 19, 2021) – How does Houston’s economy stack up against other major cities? What’s the age breakdown of our growing population and how are our residents getting around? How does Houston’s cost of living compare with other metros and just how many Houstonians are getting college degrees?

Those are just a few of the many questions answered in the 2021 edition of the Partnership’s Houston Facts publication. Houston Facts has presented unvarnished information about the Houston region since 1959, and its predecessor publications—under different names, but with the same objective—date back to 1906. Over the decades, Houston Facts has grown well beyond its original four-pages so that the Partnership could expand the range and depth of coverage to include more about the region’s parks, museums, schools, living costs, economy and a host of other topics. Today, Houston Facts is a concise, comprehensive almanac for the Houston region.

Here are a few highlights from this year’s edition, developed by the Partnership’s Research team and presented by PNC Bank.

Getting Around
The vast majority of Houstonians still drive their personal vehicle to work solo. The 2019 American Community Survey showed that nearly 81% of residents commute alone while another 9.3% carpool. Just 2% use public transportation and 5.1% reported working from home. It took area workers 30.7 minutes on average to commute to work in 2019. The survey was conducted pre-pandemic, so it’s unclear whether workplace shifts will alter the results of the next survey.

Higher Ed Landscape
Colleges and universities in the Houston area enrolled more than 417,000 students across 32 academic institutions in the fall of 2020, according to the Texas Higher Education Coordinating Board. Community college students accounted for 45.2% of enrollment in 2020.

Economic Perspective
The U.S. Bureau of Economic Analysis estimated the Houston MSA’s Gross Domestic Product (GDP) stood at $512.2 billion in 2019, making it the seventh largest U.S. metro economy. If Houston were a state, its GDP would rank 15th, behind Michigan ($536.9 billion) and ahead of Maryland ($426.7 billion) and Colorado ($393.0 billion). If the MSA were an independent nation, it would rank as the world’s 27th largest economy, behind Belgium ($529.7 billion) and ahead of Nigeria ($448.1 billion) and Austria ($446.3), according to the International Monetary Fund.

An Expanding Corporate Hub
Metro Houston ranks third in the nation in Fortune 500, and fifth in Fortune 1000, headquarters. Many other Fortune firms maintain U.S. offices in Houston. The 20 companies on the Forbes Global 2000 list that are headquartered in Houston have a combined total revenue of $413.6 billion.

Evolution of Tech
Houston is a thriving hub of digital tech talent. With more than 243,900 tech workers, the region has the 11th largest tech workforce in the U.S., according to the Computing Technology Industry Association. In 2019, Houston’s tech industry contributed $29.2 billion to the region’s GDP. Houston is also home to 9,290 tech related firms, including more than 700 venture-backed startups. These companies received $2.7 billion in venture capital funding from 2016 to 2020.

Role of International Business
The Houston region has trading relationships with more than 200 countries. The Houston/Galveston Customs District handled 266.6 million metric tons in exports valued at $129.5 billion in 2020, according to WISERTrade. These exports accounted for 65.8% of the value of total trade that passed through the region last year—a 21-point increase from 44.5% in 2011.

No. 1 Port
In 2019, the Port of Houston ranked first in total tonnage (domestic and foreign)—after 27 consecutive years in second place—and first in foreign tonnage (exports and imports) for the 24th consecutive year, according to the most recent data available from the U.S. Army Corps of Engineers. Globally, the Port of Houston ranked as the 16th largest port in the world by total tonnage.

Find more useful information in this year’s Houston Facts, presented by PNC Bank. If you want to speak with Partnership Senior Vice President of Research or members of his team about findings in Houston Facts, reach out to one of the contacts below.

The Nuevo Leon State Government visited the Partnership this week in an effort to strengthen the relationship between the two regions, focusing on further developing their energy, logistics, life sciences and technology ecosystems. The visit comes on the heels of last monthâs successful economic development trip to Mexico led by Houston Mayor Sylvester Turner, Houston First Corp. and the Partnership. Nuevo Leon Governor Samuel Garcia, Secretary of Economy Maestro IvÃ¡n Rivas RodrÃ­guez, and General Director of the Corporation for the Development of the Border Zone of Nuevo LeÃ³n Dr. Marco Antonio GonzÃ¡lez Valdez all participated in a luncheon where they discussed infrastructure proposals and the stateâs thriving economy. International Bridge Master Plan Gonzalez introduced Nuevo Leonâs plan to modernize Port of Colombia, referring to the project as priority for Governor Garciaâs administration. The Port of Colombia stands as the only international bridge directly connecting Texas to Nuevo Leon and ranks No. 3 of total US-Mexico customs federal tax collection. Gonzales discussed plans to maximize the portâs activity, noting advanced talks to reactivate a railroad to the border town. He also said establishing a cargo airport and promoting strategic relocations of exporting factories are key objectives for the administration The Thriving âEconomiaâ Secretary of Economy Maestro IvÃ¡n Rivas RodrÃ­guez discussed the Nuevo Leon economy, led by the capital Monterrey, which accounts for 92% of the stateâs population. Rodriguez highlighted Nuevo Leonâs business competition and workforce, noting it generates 7.8% of Mexicoâs GDP despite the state accounting for only 4.6% of the countryâs population.Â  Rodriguez shared other economic factors, concentrating on the stateâs foreign direct investment (FDI) records. According to the secretary, with $921 million USD of FDI in Q4 2021 the state of Nuevo Leon ranked #1 in the country, accounting for 24% of Mexicoâs total FDI.Â  Rodriguez also emphasized the stateâs recovery from the pandemic and business sectors. âWe are not only recoveringâ¦we are doing much better,â Rodriguez said. Â âWe are ready for companies and people to come and have a soft landing in Nuevo Leon.â Memorandum of Understanding Senior Vice President & Chief Economic Development Officer Susan Davenport, Governor of Nuevo Leon Samuel Garcia, and Nuevo Leon Secretary of Economy signed a memorandum of understanding. The MOU represents an agreement of future collaboration between Houston and Nuevo Leon. Remarks from Nuevo Leon Governor Governor Garcia discussed the importance of the Port of Colombia project, placing an emphasis on tax revenue. âImagine what we can accomplish with our peopleâ¦[and] with a good port.â The Mexican governor also highlighted Texasâs and Houstonâs economic development wins. âTexas has done a great job winning California [companies]â¦ the [growth of] new Silicon Valley in Austin and energy matters in Houston.â Honoring Governor Garciaâs visit to Houston and anticipating multi-industry collaborations, Mayor Turner proclaimed April 26 as Nuevo Leon Day.Â  Learn more about Houstonâs global business ties and register for the Partnershipâs International Business Month events - a celebration of Houston's thriving international ties and our position as one of today's great global cities.
Read More

Despite issues including inflation and the Russia-Ukraine war weighing on consumer sentiment, the U.S. economy continues to move in a positive direction as does the local economy, according to Partnership Senior Vice President of Research Patrick Jankowski.Â  Jankowski delivered an update as part of the organizationâs digital Economy Series on April 6. He outlined several indicators of strong momentum as well as issues to monitor as we move into the second quarter of 2022.Â  The U.S. GDP grew just under 7% in Q4. Jankowski said this is perhaps the strongest GDP growth the nation has experienced in recent history and an indicator of continued growth.Â  New orders for manufactured goods and private domestic investment are both at their highest levels in more than four years.Â  The March national jobs report shows the country is creating jobs at twice the 10-year average. Employment is currently just 87,000 jobs shy of where it stood pre-pandemic.Â  Initial jobless claims are at their lowest level since 1969 and the unemployment rate stands at 3.6% making the labor market extremely tight.Â  U.S. growth is a good sign for Houston, which tends to follow the direction of the national economy, Jankowski said. Nevertheless, recent surveys indicate consumers concerned about inflation and rising gas prices are rethinking their spending plans. A number of factors are contributing to the 7.9% spike in inflation over the last year, including consumer demand and supply-chain bottlenecks. The automotive sector has been hit particularly hard by supply chain woes leading to mounting backorders and a slowdown in sales.Â  On the housing front, a drop in active listings has led to a decline in overall inventory and price spikes. That means those on the selling side are likely to get a good price for their home but will have difficulty finding the next one. The situation is also prompting more people to stay in apartments rather than looking to buy.Â  âConsumer confidence has dropped a bit but itâs still higher than it was over the last decade,â Jankowski said. While some are concerned about the Federal Reserve inciting a recession by raising interest rates too high or too fast, Jankowski said he does not see a recession in the U.S. or Houston happening this year.Â  On the local front, Houston now ranks 8th among the nationâs largest metros when it comes to post-pandemic economic recoveryâan improvement over last year. Construction contracts are up so far this year compared with 2021 and initial claims for unemployment are back to pre-pandemic levelsâall signs of growth.Â  See more economic indicators and other data from the Partnership, including the Houston Economy at a Glance report.Â  Â
Read More

State of the Texas Medical Center

From the world-renowned Texas Medical Center south of downtown to fine community hospitals in outlying areas, Houston boasts medical facilities and expertise second to none. The TMC is a top destination in the world…