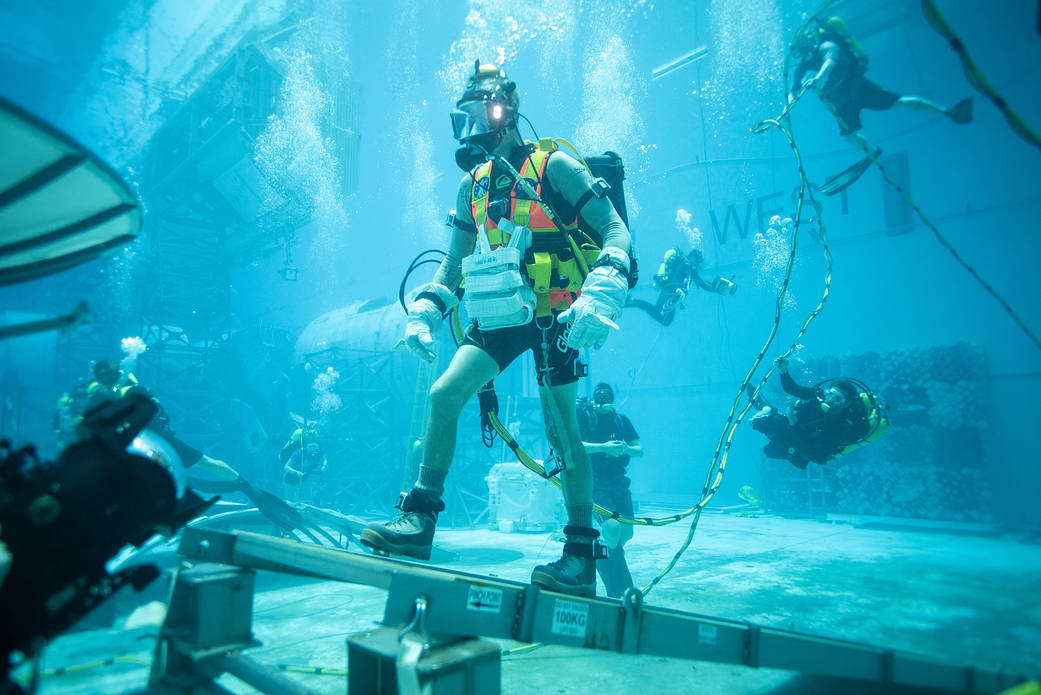 Aerospace industry leaders shared why Houston is the current and future leader of human space exploration during the Partnership’s annual State of Space event on October 11.

“At some point in the very near future, we’re going to land human beings on the moon, and we’re going to say, ‘Moon, Houston,’” NASA Astronaut Kate Rubins said during a panel discussion. “This is the only city in the world whose name is looped into this scenario.”

Steve Altemus, Intuitive Machines’ President and CEO, Peggy Guirgis, General Manager of Space Systems at Collins Aerospace and Vanessa Wyche, Johnson Space Center Director, were also part of the panel moderated by Rice Space Institute Director David Alexander. The panel discussed the exciting developments occurring in Houston, including its involvement in NASA’s Artemis program. JSC serves as mission control for every manned mission, which will include Artemis 1 once it launches.

“It’s incredible that we’re collectively leading this mission back to the moon and it’s starting from Houston,” Altemus said. Intuitive Machines is working on several projects for NASA, including developing lunar landers and other technology. The Houston-based company and Collins Aerospace are major tenants at the Houston Spaceport, a hub for aerospace and aviation activities.

The panelists pointed to the region’s talent, infrastructure and “sense of community” as attributes that attract companies. That sense of community is what allows aerospace companies, NASA and others to “come together to achieve our goals,” Altemus said.

But the panelists also noted that continued investments in infrastructure, building a talent pipeline and more private-public partnerships will be key for Houston to be seen as the epicenter of human exploration and discovery.

“We need to continue to collaborate and work together to ensure that we’re not only establishing the infrastructure, but that we continue building that talent pipeline that keeps pace with the rapidly changing ecosystem,” Guirgis said.

Innovators, companies and local colleges and universities are already showing their commitment to investing in positioning Houston as a leader in the aerospace industry. The Collins Aerospace facility at the spaceport will include Houston’s first-ever spaceflight incubator, where startups, universities and industry professionals will be able to solve complex space technology challenges. Additionally, the San Jacinto College EDGE Center focuses on building a talent pipeline, and the Ion is partnering with JSC to launch a technology transfer center at the ion to bolster innovation.

Houston is home to over 350 companies involved in aircraft or space vehicle manufacturing, research and technology or other air transportation support activities. The region’s trade in aircraft, spacecraft, and parts totaled $1.3 billion in 2021.

Investing in infrastructure and advanced technology at Houston’s airports will be critical in keeping up with Houston’s rapid growth. That was the message Houston Airports Director Mario Diaz shared during the Partnership’s annual State of the Airports event on October 5. “We can no longer make any improvements at the airports on the margin,” Diaz said. “No more minor fixes here and a band-aid there. No more nibbling at the edges. We’ve got to take big bites.” Capital improvement projects are underway at Bush and Hobby Airports aimed at creating a better experience for passengers and accommodating increased demand. The IAH Terminal Redevelopment Program (ITRP) includes a new 17-lane security checkpoint, roadway improvements, a new concourse, a fully renovated Terminal D and more. “It's going to be a phenomenal, one-of-a-kind, best-in-class terminal when it's finished,” Diaz said. Southwest Airlines is adding seven new gates at Hobby Airport, one of which will accommodate international travel. Additional improvements also include more gates, renovated baggage systems, replacing the Skyway and installing energy-efficient equipment among other things. Diaz also provided insight into the future of aviation by highlighting electric vertical takeoff and landing vehicles (eVTOLs), which look like flying taxis and could eventually be used for short trips without the need to use an airport. United recently announced a $15 million investment in Eve Air Mobility for 200 four-seat eVTOLs, expecting the first deliveries as early as 2026. “Their potential to greatly increase our efficiency while helping to lower the heavy carbon footprint are endless,” Diaz said. The success of Hobby’s solar panel array, which Diaz said is “generating power that is saving almost 7,000 pounds of carbon emission every month,” has the Houston Airports System exploring the possibility of a solar farm at Bush Airport as it continues to explore ways to reduce greenhouse gas emissions. Passenger traffic has increased compared to last year, but it remains below pre-pandemic levels. According to the Partnership’s latest aviation data, the Houston Airport System handled 52.2 million passengers between August 2021 and August 2022, a 45% increase over the same period a year earlier. Houston is the only city in Texas with two international airports and one of only eight in the U.S. Houston’s airports deliver roughly $36.4 billion to the local economy and support approximately 190,000 jobs. “Our airport system is one of the region’s key economic drivers. It fuels growth across the region and is an important factor in advancing Houston as a great, globally-connected city,” Partnership President and CEO Bob Harvey said during the event.
Read More

Our reimagined Councils - now Forums - offer networking and in-depth discussions on topics centered around industries and initiatives moving Houston forward as a great global city. This Council will focus on…