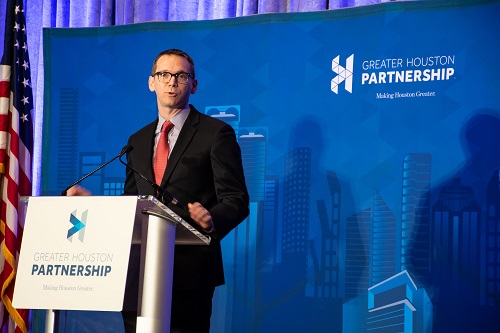 Texas Education Commissioner Mike Morath laid out the challenges for public education in the state and how Texas is addressing them during his keynote address at the Partnership’s Inaugural State of Education event on September 16.

“We are much better than we’ve ever been before," Morath said, “but we’re still not good enough for our kids. This is the story of public education.”

Morath highlighted a number of areas for improvement.

For instance, 90% of students graduate on time in Texas. But six years after they graduate high school, only about a third of students have a bachelor’s degree or associate’s degree.

“This is a huge challenge for us,” said Morath.

The education commissioner also noted the rise in student poverty in the state and that about 60% of students require some sort of subsidy so they can eat.

Commissioner Morath lauded the passage of House Bill 3 during the 86th Legislative Session earlier this year, touting the role it will have in improving student outcomes across Texas.

“This is an historic change in public policy,” said Morath.

The Partnership advocated for HB 3, which became the most consequential public school finance reform enacted since 1993. On a statewide scale, HB 3 secured:

For our region, that translates into:

Following Commissioner Morath’s keynote address, Partnership President and CEO Bob Harvey addressed the Texas Education Agency’s accountability ratings that were released last month. Harvey noted that while more than half of Houston ISD schools received an A or B rating, over 11,000 students attended a failing school.

“For the sake of our future, we must all do better. We think the Houston Independent School District’s board's long-term failure to consistently support all of our schools, all of our kids, warrants new leadership in HISD,” said Harvey. “That is why we have called on Commissioner Morath to appoint a local board of managers to run the district that is composed of a diverse group of Houstonians who will prioritize our children and create sustainable conditions where clear-minded decisions can be made.”

Harvey said the Partnership has laid out five principles the organization believes this local board of managers must embrace, which are:

As the local community navigates a period of uncertainty in Houston ISD, the Partnership will remain focused on these guiding principles for how Houston can do better for our students.

Equitable access to connectivity and ensuring students receive school meals are two of several prioritiesÂ greater Houston education leaders are incorporating intoÂ plans for the upcoming school year. The Partnership webinar on school reopening plans held on July 29 featured two guests: Dr. Rodney Watson, Superintendent of Spring Independent School District. Spring ISD serves more than 35,000 K-12 students Dr. Pam Wells, Executive Director of Region 4 Education Service Center, one of 20 regional centers that assists school districts and charter schools in improving efficiencies and student performance. Region 4 serves a seven-county area comprised of 48 public school districts and 39 open-enrollment charter schools, representing more than 1.2 million students, 99,000 educators, and 1,500 campuses. School Leaders Navigate a Changing Landscape Dr. Wells said its been a challenge for superintendents her organization works with to make decisions for the coming year.Â  âPlanning is a real key to success for our educational system,â saidÂ Wells. âOur superintendents have had to make changes on an almost weekly basis.â Wells noted new guidance the Texas Education Agency issued earlier in the week. She said educators are trying to balance the need to educate students while also keeping them safe. âThe very best place for children to be educated is the classroom,â saidÂ Wells. âAs we know what is happening with our community today with the spread of COVID-19, it makes it very challenging.â Spring ISD Offers Options for 2020-21 School Year Spring ISD is offering two options for the upcoming school year â Safety-First In-Person and Empowered Learning At-Home.Â  The Safety-First In-Person option is designed to allow for more days of in-person instruction when there are minimal and controlled levels of COVID-19 in the area and moving to Empowered Learning At-Home if outbreaks of the virus occur. The school district has been making plans based on four scenarios, which range from âgreenâ (a minimal and controlled level of COVID-19 in our community, meaning new instances of transmission are limited) to âredâ (a severe and uncontrolled level of COVID-19 in our community, meaning outbreaks are present and worsening).Â  Dr. Watson noted the district spent a lot of time gathering feedback from parents and staff on plans for the coming year. Spring ISD has drafted plans that address several areas including transportation, school nutrition and school schedules. Thereâll also be changing to how the classroom is laid out within the district. That includes plexiglass dividers installed where physical distancing isnât feasible and student school supplies kept separate.Â  The school district also developed an intersessional calendar that provides opportunities for the school district to extend the school year through the end of June 2021. Equitable Access to Connectivity Both guests underscored the need to ensure equity and access to devices and connectivity for remote learning.Â  âOne of the huge challenges is that not all of Houston children have devices and connectivity to be successful when they switched to virtual learning earlier this year, â said Wells. âThis was a real challenge for families as well.â Even for those parents and children who end up back in school, we know there will be situation where schools will have to shut down, so virtual learning will continue to be an important part of education planning going forward, Wells said.Â  Earlier this month, Governor Greg Abbott announced the State of Texas was allocating $200 million in federal Coronavirus Aid, Relief, and Economic Security (CARES) funding to the TEAÂ toÂ purchase of eLearning devices and home internet solutions for remote learning. The TEA gave Region 4 the authority to administer this state bulk order purchase. Wells said this is going to allow over 1 million devices and 480,000 hotspots to be purchased with state funds providing matching dollars for the majority of requested devices and hotspots. Spring ISDâs efforts have included ordering 11,000 Chromebooks and allocating over $5 million to purchase technology to support remote learning. The district will also support families through digital and nondigital modes, including an enhanced Help Desk that will be made available in multiple languages.Â  Ensuring Student Meals ContinueÂ  Watson noted about 80% of Spring ISDâs 35,000 students are economically disadvantaged, so child nutrition was one of several priorities district leadership included in their plans.Â  âWe have a lot of families who depend on us for meals for their children,â saidÂ Watson.Â  Spring ISD conducted curbside pickup for families this past Spring, saidÂ Watson. âWe are looking at alternative ways to get food to students neighborhoods and their bus stops. We will not sacrifice feeding our kids for any reason.â Wells echoed the priority of ensuring children in the regionâs school districts are fed. She said there were many more children who were eligible to get food than families came to pick up in the spring, so there is a gap.Â  âAs a community, we need to do everything we can to recognize that itâs a really critical problem.â Learn more about the reopening plans of area districts here. See Spring ISDâs plan for the 2020-21 school year here. PartnershipÂ webinarsÂ are open to Partnership members. Members also have ongoing access to a recording of the presentation. Learn more about membership.Â
Read More

A new labor market report highlights the disruption that greater automation and increased requirements for digital skills is causing regional workers and the importance of helping workers build digital skills for occupations that can lead to economic opportunity. The report, âNavigating the Changing Nature of Work,â provides data-driven insights and approaches that can help employers, educators, career counselors, and other workforce development stakeholders chart upskilling and re-skilling pathways to good middle-skill occupations for workers at risk of technological disruption or displaced by the pandemic.Â  Key Findings in Brief: The integration of automation technologies into the workplace creates a significant risk of disrupting job tasks and skills requirements among Greater Houstonâs low- and middle-skill workers. More than 50 percent of Greater Houstonâs middle-skill jobs face above average risks of automation.Â  Strong digital skills are becoming increasingly necessary for all regional workers, regardless of their industry, occupation or education level.Â  A well-conceived, regional upskilling framework could guide workers as they make decisions about investing limited time and resources to pursue careers with greater mobility. Â  By mapping viable and desirable upskilling progressions for the regionâs middle-skill workers, workforce development stakeholders could support the continued growth of the Greater Houston economy and increase economic opportunity for its residents.Â  Â  The report illustrates that most middle-skill occupational segments in Greater Houston currently require at least a medium level of proficiency in digital skills, and the trend toward increased digital skills likely will continue to rise as employers further integrate digital technologies into their operations. Already six regional middle-skill occupational segments require higher (i.e., medium and high) levels of digital skills. Workers will need continual education and upskilling to achieve the Â level of digital skills critical to success across occupational segments today and into the future.Â  The reportâs research suggests a strategy for developing viable and desirable pathways across skill levels and occupational segments for workers to transition into new jobs with better prospects for the future. Download the full report here.Â  UpSkill Houston engaged TEConomy Partners, LLC to conduct the research highlighted in this report and in the previously released âMiddle Skills Matter to Greater Houston".Â TEConomy conducted its analysis in the summer of 2019.
Read More

Join us for the second State of Education event to learn how we can strengthen our region’s education system to provide young adults a future where they can prosper and succeed. A strong education system is…