In this edition we offer insight into the U.S. recovery status and an outlook for 2021.
Share
November 2020 Economy at a Glance

In March, when this newsletter first addressed COVID-19 and its impact on the economy, only a handful of cases had been reported. Since that time, infections and deaths have skyrocketed. 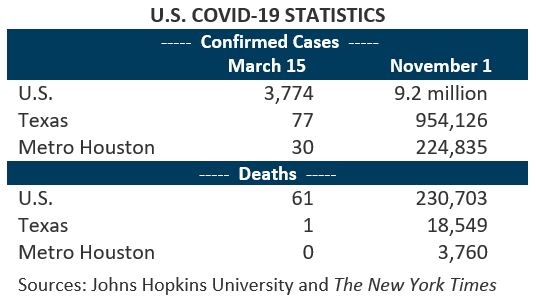 The spike is especially sharp in Europe. Belgium, France, Germany, Greece, Spain and the United Kingdom have again implemented lockdowns to contain the spread. U.S. officials, however, remain reluctant to impose similar restrictions. They worry about damage to the economy, a revolt from consumers suffering from COVID fatigue, and the impact of a shutdown on the November elections.

The flood of new cases threatens the nascent recovery. U.S. gross domestic product (GDP) grew 7.4 percent, or $1.3 trillion in Q3, adjusted for inflation. The economy benefited from an increase in consumer spending, a restocking of inventories, exports, new investments in building, equipment and inventories, and new home construction.

Despite the impressive growth, GDP remains 3.5 percent ($670 billion) below its previous peak and 5.0 percent ($930 billion) below where it would have been if not interrupted by the pandemic. Two-thirds of the economists polled by The Wall Street Journal in early October believe GDP won’t return to pre-pandemic levels until Q4/21 or later.

That fits the historic pattern. GDP always returns to its pre-recession level sooner than employment. Businesses put idle capacity to work, expect more from their remaining employees, and wait for a significant jump in demand before taking on additional staff. That’s been true of the past three recessions and will be true this time as well.

The nation has created 11.4 million jobs since May, recouping over half March and April’s losses. But growth is already slowing. Employers added only 661,000 workers in September, less than half the 1.5 million added in August. The nation remains 10.7 million shy of its February level. The recent spike in COVID cases, the expiration of the federal stimulus packages, and uncertainly over the outcome of the presidential election will further slow job gains. 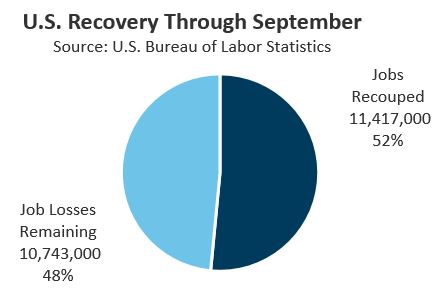 U.S. unemployment peaked at 14.7 percent in April and has steadily improved, decreasing to 7.9 percent in September. But the headline number belies what’s actually happening in the labor market. Since February, 4.4 million Americans have dropped out of the labor force and are no longer counted as unemployed. Factor them back in and the unemployment rate jumps to 10.3 percent. 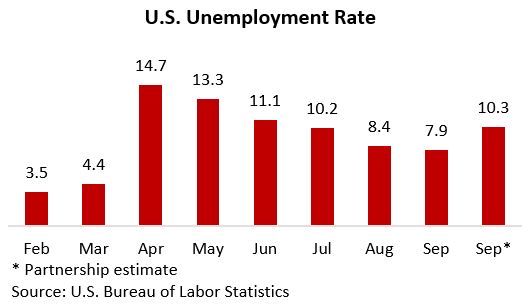 To read the rest of this section, please download the full report.

The Partnership’s ’21 economic outlook event will be held Tuesday, December 8, at noon. This will be a virtual event with attendees accessing the presentations via Zoom.

The event is free to members, but they must register in advance. The fee for nonmembers is $25. Attendees can register at the events section of the Partnership’s website.

Houston’s real gross product (RGP) will shrink 4.8 percent this year (December to December) before rebounding 4.2 percent next year. That’s the latest projections by The Perryman Group, the Waco-based think tank that’s been analyzing and forecasting for U.S., Texas, and Texas metros since the early 1980s. 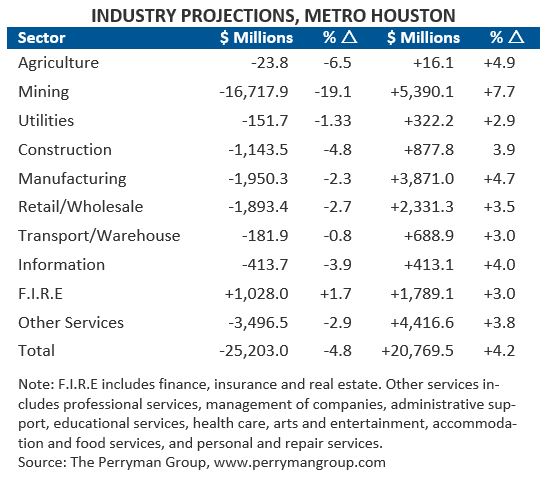 To read the rest of this section, please download the full report.

Here are the facts to know about the Houston region this month
1
November Takeaway #1
The much-anticipated second wave has arrived. The world now average 475,000 new cases per day; the U.S., 80,000; Texas, 6,600; and Harris County, 600.
2
November Takeaway #2
The nation has created 11.4 million jobs since May, recouping over half March and April’s losses. But growth is already slowing. Employers added only 661,000 workers in September, less than half the 1.5 million added in August.
3
November Takeaway #3
Metro Houston added 24,400 jobs in September, bringing the total recovered since April to 142,600. Houston re¬mains 207,600 jobs short of its pre-pandemic level. September’s job gains were concentrated in a few sectors, almost all tied to students returning from summer break.