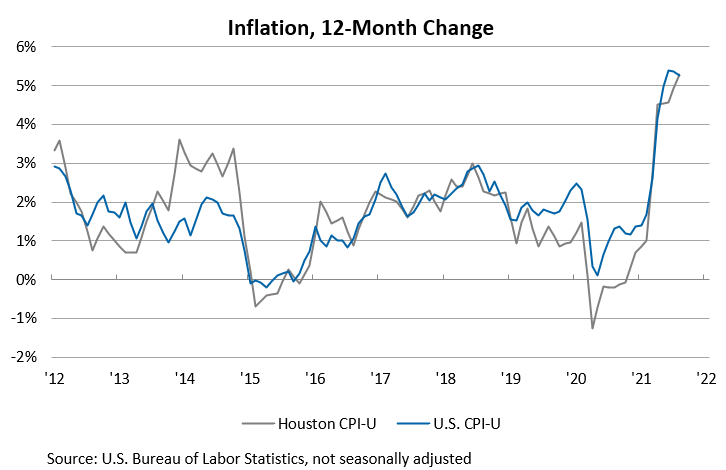 The cost of consumer goods and services as measured by the Consumer Price Index for All Urban Consumers (CPI-U) rose 5.4 percent nationwide from September ’20 to September ’21, according to the U.S. Bureau of Labor Statistics. Energy costs rose 24.8 percent from the previous September, largely due to a 42.0 percent surge in the cost of motor fuel. The cost of natural gas grew 20.6 percent, while electricity increased 5.2 percent. The shelter index rose 3.2 percent from September of last year. In that same period, overall food prices increased 4.6 percent, grocery prices 4.5 percent, and the cost of dining out 4.7 percent. Core inflation (all items less the volatile food and energy categories) increased 4.0 percent since September ’20.

The consumer price index for September ’21 once again showed gains in every major category. Prices returned to a 13-year high in September, after slightly dipping in August. Supply chain disruptions persist along with increased spending, despite higher prices. The Washington Post reports that “the delta variant of the coronavirus continues to weigh on supply chains, the job market and the Federal Reserve’s own expectations of the economy.” The Federal Reserve maintains that rising prices are transitory and will be resolved in ’22.

In the Houston-The Woodlands-Sugar Land metro area, the energy index increased 28.8 percent from September ’20 to September ’21, boosted by a 48.4 percent surge in motor fuel prices. Natural gas prices rose 16.4 percent, while electricity costs increased 12.8 percent in that same period. The Houston Chronicle reported that “Houstonians’ power bills are some of the highest in the nation.” Electricity costs are often high in the south due to strong demand during hot weather.

The October CPI data for Houston, which includes all items in the index, will be released November 10.

Review the latest data on goods and services moving between the Houston region and countries abroad.