Day 1 of Future of Global Energy: Houston Has Opportunity and Responsibility to Lead Energy Transition 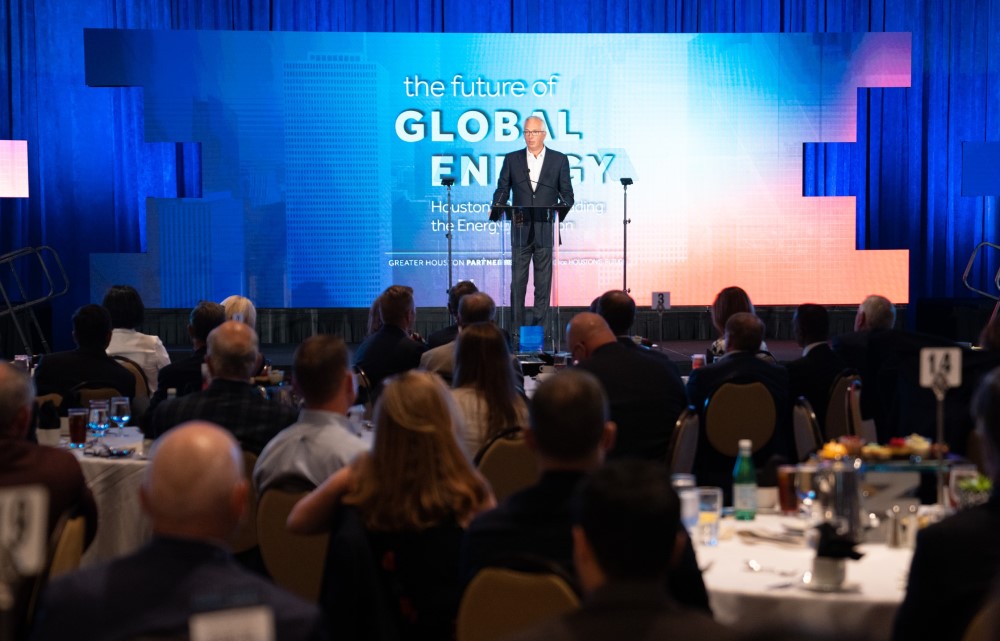 Houston can lure significant investment and hundreds of thousands of new jobs if the region takes decisive action to lead the global energy transition to a low-carbon future. That’s according to a new strategic plan released this week by the Greater Houston Partnership at the Future of Global Energy conference, a three-day event the organization is co-hosting with the Center for Houston’s Future.

The strategy—Houston: Leading the Transition to a Low-Carbon World—breaks down how Houston can use its expertise and infrastructure in the energy and chemical sectors to accelerate low-carbon solutions. The goal is to position Houston as the leading global hub for energy and clean tech innovation. The strategy will guide the work of the Partnership’s Houston Energy Transition Initiative.

“The global energy transition can either be viewed as a huge threat or as an extraordinary opportunity for Houston,” said Partnership President and CEO Bob Harvey in opening the conference. “We choose to view this as a tremendous opportunity to enhance the long-term economic future and global competitiveness of Houston.”

Harvey said that Houston has the knowledge base, skill sets, and infrastructure to help guide this work, “and it is simply imperative that we do so.”

Houston Mayor Sylvester Turner, who also spoke at the opening of the conference, referenced the city’s long identity as the Energy Capital of the World. “That title is ours to lose,” Mayor Turner said. “If we move forward in the energy transition in a smart and resilient way, we will stay at the forefront of the energy sector. The City of Houston’s innovation and adaptability will be key as the energy industry diversifies.”

In his keynote address, Bobby Tudor, chair of the Houston Energy Transition Initiative, outlined the elements of the strategy. Tudor, who is also chair of Tudor, Pickering, Holt & Co. LLC, discussed the advantages that will help Houston lead the effort—namely the region’s deep experience and knowledge base in all aspects of the industry as well as its significant existing infrastructure that will enable new technologies and solutions to scale.

“There is no place in America – and few in the world – that matches Houston for its concentration of energy infrastructure,” Tudor said. See his full presentation here.

The plan includes an analysis by McKinsey & Co. that estimates as many as 560,000 jobs could be created by 2050 in the region through the development of low-carbon technologies, new government policies and the reskilling of talent, among other decisive actions.

“Houston’s energy transition strategy is rooted in the city’s eagerness for innovation; our appetite for high-risk and high-reward business investments; and our capacity for executing on massive, complex projects around the world,” Tudor said.

Harvey said it’s the Partnership’s responsibility to highlight a path forward for Houston and to help spur the conversations and the work to advance the Houston region. Success on that front will help ensure Houston remains a global city for years to come, he said.

More than 40 Houston area companies have signed on to a letter of support for the Houston Energy Transition Initiative. See the letter and the signatories to date here. All companies and organizations in the region are invited to join in the commitment.

Get more details about the Future of Global Energy, presented by Chevron. Learn more about the Houston Energy Transition Initiative and see the full strategic plan.

Greentown Labs continues to show its support for fostering energy innovation in Houston as the city aims to lead the world’s energy transition. The climatetech startup incubator has launched the Texas Entrepreneurship Exchange for Energy (TEX-E) to support students in developing next-generation innovations. The collaborative initiative includes MIT’s Martin Trust Center for Entrepreneurship, a research and teaching center that provides expertise, support and connections to MIT students, and five Texas universities, including Rice University, the University of Houston, Texas A&amp;M University, Prairie View A&amp;M University and the University of Texas. “Houston has long been known as the energy capital of the world, but to lead the world’s energy transition, the city must create a strong, vibrant innovation ecosystem to support the next generation of entrepreneurs and energy companies,” said Lara Cottingham, Chief of Staff at Greentown Labs, in a press release.  Students participating in the program will have access to mentorship with Greentown Labs’ entrepreneurs, networking events, career opportunities and cross-learning with MIT. The initiative will help continue to pave the way for Houston to solidify its role as the leader of the global energy transition. “The TEX-E collaboration will provide valuable opportunities to our students, and Houston is a natural location to create such an ecosystem,” said Ramanan Krishnamoorti, vice president for energy and innovation at the University of Houston, in a press release. “Training new talent and supporting their pursuit of innovative ideas are vital in addressing the growing global need for affordable, reliable, and environmentally sustainable energy.” Greentown Houston experienced a successful first year, attracting more than 60 startups, including several that relocated from outside the U.S., proof that Houston is where Energy 2.0 companies want to be. From 2017 to 2021, venture capital funding in Houston’s energy space totaled more than $327 million. More than 4,700 energy-related firms are located within the Houston metro. “Boston and Houston might seem like an odd pairing, but they complement one another beautifully,” said Ben Soltoff, Ecosystem Builder and Entrepreneur in Residence at the Martin Trust Center for MIT Entrepreneurship. Despite Boston’s strong climate innovation ecosystem, startups looking to scale up “look towards Texas, where they can find talent, space, and industry knowhow in spades. Together, these two regions are unstoppable,” Soltoff said. TEX-E is also in line with the Partnership’s Houston Energy Transition Initiative, which aims to position Houston to lead the global energy transition to a more efficient and sustainable, low-carbon future, by deploying key strategies, including jumpstarting emerging technologies.
Read More