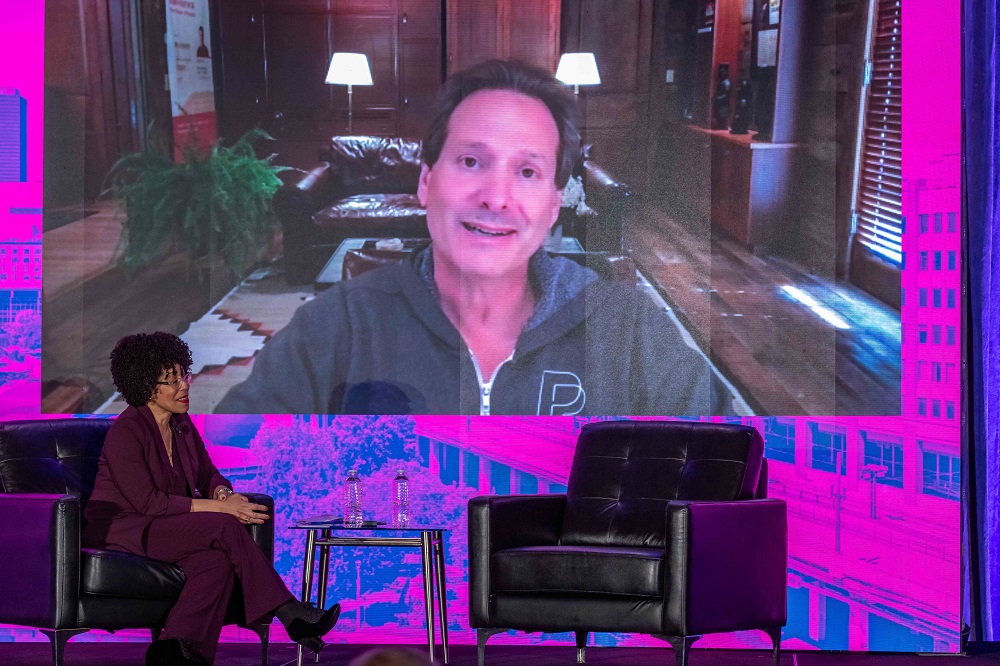 Dan Schulman’s first job as a young adult was driving a truck after getting rejected from multiple colleges he applied to. Later, he landed a job as an assistant account executive at New Jersey Bell while attending night school at New York University. Such humble beginnings helped shape the attitude of one of the most successful leaders in the tech world. Today, Schulman is CEO of the fintech giant PayPal where he’s leading the charge to democratize financial services and e-commerce. He’s also widely recognized for his commitment to social change, and his passion for equality, justice and basic human rights.

Schulman discussed the importance of values-based leadership, the big steps he took to make his company’s workforce more financial stable and other topics during a fascinating fireside chat at the Partnership’s DiverseCity Summit this week. He spoke with Partnership Senior Vice President of DEI LaTanya Flix. Here are a few key takeaways:

Schulman said he’s learned that the single biggest competitor differential for his company is the caliber of people who work there and the passion they bring. “Your company’s mission needs to be supported by a set of values and those need to be something that guide your decisions as a CEO,” he said. “They need to be more than words up on a wall—they need to be lived.”

Schulman said embracing diversity and fostering an inclusive environment is a key value for PayPal—one that’s guided his actions as CEO for the last seven years.

As a major company, it’s impossible for PayPal to avoid the culture wars that have become pervasive nationwide, Schulman said. “We have to make hard decisions. People can disagree with those decisions…But that’s what it means to be a responsible CEO, it’s values-based actions.” He added that consistency is critical. “Our employees understand what we’re going to stand up for. They may not agree with every public stand we make but we are very consistent about it.”

“We think that standing up against discrimination of any kind isn’t a red issue or a blue issue, it’s a red, white and blue issue,” Schulman said.

Thinking Beyond the Bottom Line

It’s not easy being the CEO of a major company these days, Schulman said. Employees, customers, board members, shareholders and other constituencies all have expectations that often don’t align. “But we need to stand up for much more than making money,” he said. “I don’t believe that the ideas of profit and purpose are at odds with one another.”

Taking a Hard Look Inside

Though aware of the statistics that show many Americans struggle to make ends meet, Schulman said he naively thought that wasn’t the case at PayPal. After all, his company pays its thousands of employees at or above market rate for their wide range of roles. But after conducting a poll, he found that many entry-level employees at PayPal were struggling with their finances and having to make tough decisions about health care and other necessities. For a large segment of the company’s workforce, net disposable income—or income after paying for basic needs such as food and shelter—was between just 4% and 6%.

“This was an investment in our people, and it was more important than any marketing or anything else we could invest in as a company, because the foundation of our success rests on the shoulders of our employees,” Schulman said. Following the changes, PayPal’s attrition rate dropped, as did training costs, while productivity rose.

“Creating financial health for our employees was thinking about the future of our company,” Schulman said. “But also, how do we move from being a good company to a great company over the medium and long term.”

“A Movement Over Time”

Schulman is one of the founders of the Southern Communities Initiative (SCI). Launched in April 2021, the initiative aims to accelerate the deployment of corporate resources into six southern communities, including Houston, that are home to roughly 50% of the nation’s Black population. In the aftermath of the George Floyd murder, Schulman wanted to determine the best way to fight inequity and thought PayPal would give a few million dollars to organizations working on the front lines nationwide. “Someone said to me: ‘this needs to be more than a moment in time, it needs to be a movement over time.’ And it made me think: is there more I can do?”

PayPal made a $535 million commitment to “advance racial equity, sustain and strengthen underrepresented businesses and communities, and help address the economic underpinnings of racial injustice,” the company said in a statement earlier this year. By working alongside other companies through SCI, PayPal is making a bigger impact.

“Working together instead of separately lets us experiment with what works best—starting with these communities in the South,” Schulman said.

The fireside chat capped off the first day of the DiverseCity Summit where the Partnership presented the findings of the region’s first Equity & Inclusion Assessment. Learn about the findings of the assessment and the next steps through the Partnership’s One Houston Together commitment here. Get additional information about One Houston Together here.

Connecting the Dots to Help Get Houston Back on Track

Houston, like most places in the world, is forever changed by the pandemic that broke in the spring of 2020. The metro region lost 361,400 jobs in the ensuing recession, making it worse than the jobs lost in the Great Recession and the oil bust in the 1980âs. Houstonians and our local economy have been hurting ever since, and though much progress has been made, we have only recouped about 60 percent of those lost jobs. More needs to be done to help and support people and employers. It is worth reminding ourselves how we got here. The COVID-19 epidemic has been a disrupting event like few of us have seen. It shut us down and stressed our hospital systems almost to the breaking point. We worried about the sick and grieved over those who we lost. Our workforce suffered as millions of people stayed home and away from work. Many stayed away for a long, long time, even after employers began to open their doors again. The employment gap has hindered our recovery and put us on pause in a way we havenât seen in our lifetime. Effects of the pandemic have disproportionately impacted and displaced women, communities of color, and workers with low levels of educational attainment.Â  The Partnership has for years worked with member organizations and local governments to make greater Houston a metro that could thrive by building a strong, diverse 21st century economy, offering a great quality of life, and ensuring opportunity for all. Â When the pandemic threatened to upset this path, the Partnership tapped two community leaders, Matt Morris and Chase Robison, to provide key leadership and work with its Regional Workforce Development division to help chart a path forward. The idea for Houston Back on Track was born. During anÂ UpSkill Works ForumÂ on September 8,Â our first stakeholders announced Houston Back on Track as the job recovery initiative that promises to connect the dots between displaced workers and our employer partners. Through key partnerships and new ways of combining and coordinating our collective efforts, Houston Back on Track will provide job seekers with the necessary support and resources they need while searching for their next great role and career in healthcare, customer service, transportation/distribution. This alliance of community partners, education providers, and employers is a game changer that should help put Houstonians back to work in jobs with great opportunities for upskilling and growth. Houston Back on Track is supported by organizations and companies committed to making positive change. On the employer side, we are proud to have the support of: HCA Houston Healthcare, Houston Methodist, Mustang CAT, Primary Services, and Silver Eagle Distributors. These companies are seeking to hire hundreds of new employees through this effort. Our community partners will provide career coaching and wraparound services to help prepare job seekers for these roles. They are Wesley Community Center, Houston Area Urban League, Change Happens!, WorkFaith, LISC Houston, and United Way of Greater Houston. While some of these community partners will provide critical preparation and training for clients directly, we will also tap into the expertise and services of our education providers: Lone Star College, Houston Community College, and San Jacinto College. Finally, we will offer online training through LinkedIn Learning, a platform that provides a rich selection of courses in many areas of professional development. This alliance is designed for impact and will scale in the coming months. We know our challenges are great. Fears about contracting the virus are still keeping a gap between people and jobs. This is not our only variable. Many people have reconsidered what they want from their careers, and they are hoping to make a change in industry and occupation. Others want more stability, higher wages, and better benefits than they had before the pandemic. There are impacts that are still unknown to us, but one thing is certain: many job seekers will build off their existing skills and develop new skills as they move into the roles they want. It may be that our work is cut out for us, but we are committed. The partners behind Houston Back on Track are dedicated to not just connecting the dots, but also to helping improve lives. A great job can change the trajectory of an entire family. Our efforts are underway, and we will grow and scale in coming months. Our work starts with employers who need to hire qualified, entry-level workers in occupations with pathways for growth. Join Houston Back on Track if your company is committed to charting a new path forward for Houstonians displaced by the pandemic. Good results are coming. Â  Connect with the Houston Back on Track team by visiting HoustonBackOnTrack.org or contacting BackOnTrack@Houston.org.Â
Read More