In this edition we explore shifts in Houston’s population over time, how Houston compares to other U.S. metros today, and discusses some of the disparities within our region.
Share
January 2021 Economy at a Glance

Every fall, the U.S. Census Bureau releases its American Community Survey (ACS), the bureau’s annual snapshot of social, economic, and demographic characteristics for the nation.

The results of the ’19 ACS were overlooked when released last September, however. The COVID pandemic and the upcoming Presidential elections had grabbed our attention instead.

This issue of Glance corrects that oversight. Using data from the ’10 and ’19 surveys, Glance explores shifts in Houston’s population over time, how Houston compares to other U.S. metros today, and discusses some of the disparities within our region.

There’s one caveat. The ’19 ACS reflects conditions during the final year of the longest economic expansion in U.S. history. Houston, though not booming, was doing relatively well. Data gathered during the pandemic will tell a different story, but it won’t be released until this fall. We must wait another nine months for the ACS to show us how severely the Coronavirus impacted our population. In the meantime, what follows is the Partnership’s analysis of Houston’s social, economic and demographic characteristics in the waning days of the longest U.S. expansion on record. 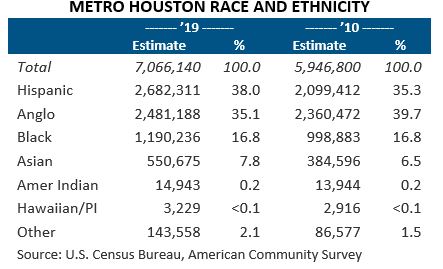 Houston’s Hispanic population surpassed the Anglo population in ’17 and now represents our largest ethnic group. No race or ethnicity comprises a majority of the population, however. It’s been that way since the late ‘90s and is likely to remain that way for at least the next 30 years. 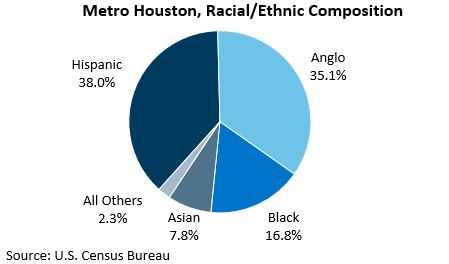 Asians were the fastest growing racial/ethnic group in the decade, their population up 43.2 percent, followed by Hispanics (27.8 percent), Blacks (19.1 percent), and Anglos (5.1 percent).

International in-migration has been key to Houston’s growth in recent years. Early in the decade, when our economy boomed, domestic in-migration added 50,000 or more residents per year. But the fracking bust, Hurricane Harvey, and a weak job market now keeps people away. Metro Houston’s domestic in-migration has been negative for two of the last three years (’17 and ’18) and negative for Harris County the last four (’16, ’17, ’18 and ’19). International in-migration, however, has dipped slightly.

Metro Houston has one of the youngest populations in the nation. The region’s median age is 34.9, compared to 38.5 for the U.S. overall. The average for the 50 most populous metros is 38.1. Houston is second only to Salt Lake City (33.2) in median age. (Note: the median is the point at which half of the population falls below that age and half above it.)
During the past decade, Houston’s population has also grown older. In ’10, the region’s median age was nearly two years younger than it is today. 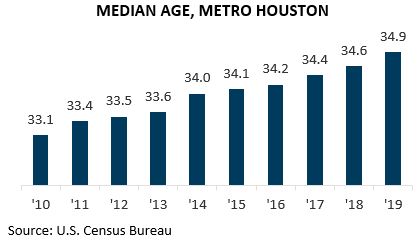 Also, one-third of Houston’s Hispanic population and one-fourth of the Black population is under 18, compared to one-fifth of the Anglo population. As a result, Houstonians entering the workforce over the next 10-20 years will represent a more diverse population than in the past. 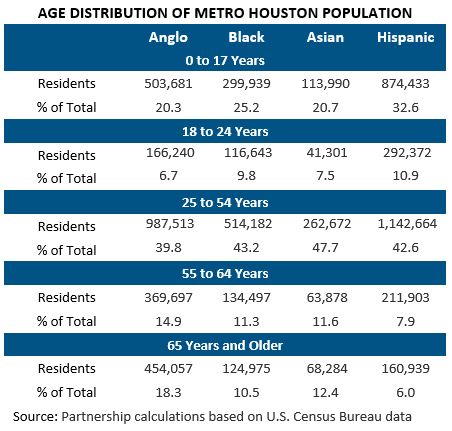 Here are the facts to know about the Houston region this month
1
December Takeaway #1
Houston has one of the most diverse and racially balanced populations of the nation’s major metros. Among the nation’s 50 most populous metros, Houston has the fourth largest Hispanic, eighth largest Black, ninth largest Asian and twelfth largest Anglo communities.
2
December Takeaway #2
Metro Houston has one of the youngest populations in the nation. The region’s median age is 34.9, compared to 38.5 for the U.S. overall. The average for the 50 most populous metros is 38.1. Houston is second only to Salt Lake City (33.2) in median age.
3
December Takeaway #3
Nearly 1.4 million Houstonians lacked insurance in ’19. Houston ranked last among the nation’s largest metros for population covered by health insurance. The metro average was 91.5 percent. San Antonio and Dallas-Ft. Worth held the 48th and 49th spots.