This issue of Glance provides a broad post-analysis of how the various sectors of Houston’s economy performed in ’21.
Share
February 2022 Economy at a Glance

Economic data for ’21 continues to trickle in. Houston set a record for job growth, recovering all but a handful of the jobs lost in the early stages of the pandemic. Passenger traffic at the region’s airports moved closer to normal. Construction activity picked up but remains below pre-pandemic levels. Oil prices and the rig count finished above where they began the year. Exports ticked up. Home sales set a record. Inflation surged to levels not seen in 20 years. Sales tax collections rebounded. Vehicle sales recovered from their pandemic lows. And the tight local labor market has sent unemployment back to pre-pandemic levels. This issue of Glance provides a broad post-analysis of how the various sectors of Houston’s economy performed in ’21

Only a handful of subsectors—chemicals, machinery manufacturing, merchant wholesalers, public education, and telecommunications—reported job losses in ’21. Those losses were more than offset by gains elsewhere.

The four sectors holding back a full recovery have recently showed improvement. As a group, energy, construction, manufacturing, and wholesale trade added 31,400 jobs, one in every five created in Houston last year. Now that growth has resumed for those four, Houston should return to pre-pandemic employment levels by mid-year. 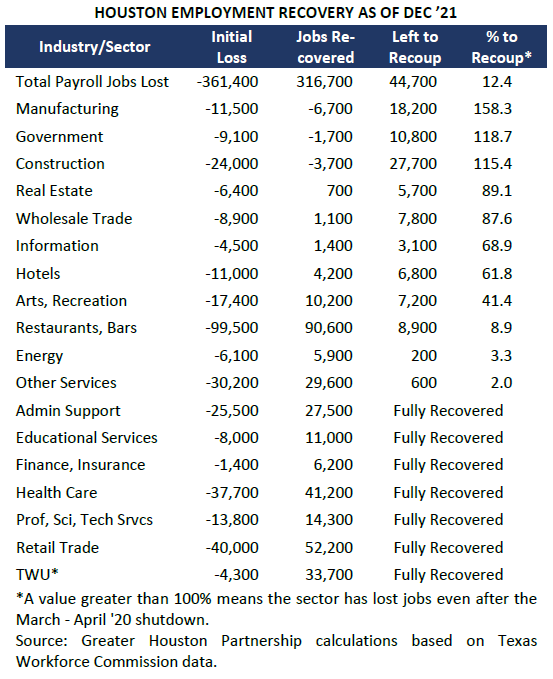 Readers of Glance are reminded that the employment data for ’21 are preliminary. A more accurate job count will be available mid-March when the U.S. Bureau of Labor Statistics (BLS) releases its benchmark revisions for the year. The reports that BLS issues monthly are based on a sample of employers, the respondents selected to be representative of their industries. The March revisions will be based on administrative records, specifically a count of employees covered by unemployment insurance at every firm in the U.S. This method, though cumbersome to collect and analyze, provides a more accurate picture of the year’s gains and losses.

The revisions could be substantial. BLS has been off by as many as 50,000 jobs in the past.  Reductions of that magnitude are highly unlikely this time, but one shouldn’t be surprised if BLS overestimated local job growth. The Federal Reserve Bank of Dallas, using data from the Quarterly Census of Employment and Wages (QCEW), estimates Houston created 131,400 jobs in ’21. That would still set a record for job growth in Houston. And coming after one of the worst downturns in the region’s history, it would underscore the overall resiliency of the Houston economy.

A potential drag on Houston’s growth in ’22 will be its labor force. Employers can’t find enough workers to fill all their open positions.  CEOs, hiring managers, and business owners lament that they could build, manufacture, and sell more if they could hire more workers. If Houston can expand its workforce through in-migration, residents coming out of retirement, or dropouts re-entering the job market, employment growth could exceed the 75,500 in the Partnership’s forecast for ’22. 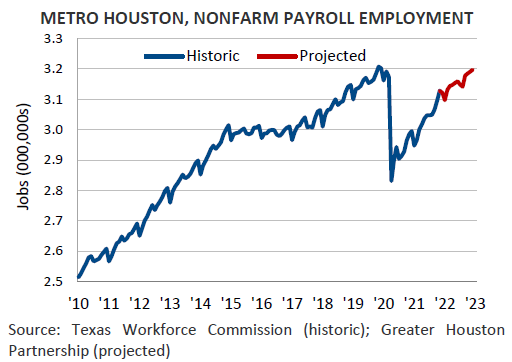 Several external factors could impact growth in ’22 as well. Expectations that the Federal Reserve will raise interest rates four to six times this year have already created volatility in financial markets. Higher rates may force firms to rethink investment and staffing decisions. Concerns over inflation have already begun to affect consumer confidence. A Russian invasion of Ukraine or a flare-up in Chinese-Taiwanese tensions could disrupt the global growth. And don’t rule out the possibility of yet another COVID wave. For now, though, Houston’s outlook remains robust.

Early in the pandemic, HAS traffic fell by over 95 percent. For the three most recent months in ’21 for which data is available (October, November and December), traffic was only down 12 percent. Though the Omicron surge has slowed the recovery, passenger growth is expected to resume as soon as the current wave subsides. 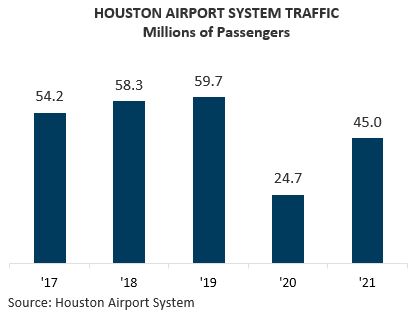 HAS earned two major accolades in ’21. William P. Hobby was the first airport in North America to earn a five-star rating from Skytrax. The London-based agency has rated airports on the quality of their products and services since 1999. Hobby was one of 14 airports in the world to receive a five-star rating. George Bush Intercontinental received a four-star rating for the fifth consecutive year.

Rail car loadings serve as a proxy for U.S. chemical production, much of which is concentrated on the Texas Gulf Coast. U.S. railroads handled 1.7 million chemical rail cars in ’21, up 5.6 percent from ’20.
Through the first 11 months of ’21, chemical exports via the Houston/Galveston Customs District topped 22.3 mil-lion metric tons, a 4.9 percent increase over ’20. Shipments rose despite damage caused to the industry during the February ’21 freeze. Exports of plastics, however, fell from 8.3 to 6.0 million metric tons, the decline starting well before the freeze, which only made matters worse.

Here are the facts to know about the Houston region this month
1
February Takeaway #1
’21 will go down as the best year on record for Houston job growth. The region created 151,800 jobs, a 5.1 percent in-crease over ’20. Prior to ‘21, the best year was 1981 when the region created 126,900 jobs. Houston has now recouped 316,700 of the 361,400 jobs lost early in the pandemic.
2
February Takeaway #2
HAS earned two major accolades in ’21. William P. Hobby was the first airport in North America to earn a five-star rating from Skytrax. The London-based agency has rated airports on the quality of their products and services since 1999. Hobby was one of 14 airports in the world to receive a five-star rating. George Bush Intercontinental received a four-star rating for the fifth consecutive year.
3
February Takeaway #3
The housing boom that began in ’20 continued into ’21. New home construction was at its strongest pace since before the Great Recession. Local builders broke ground on 41,619 homes in ’21, second only to Dallas-Ft. Worth (55,038). At the end of December, nearly 20,000 homes were under construction in Houston, nearly double the level of five years ago.
Like this article? Share with your network