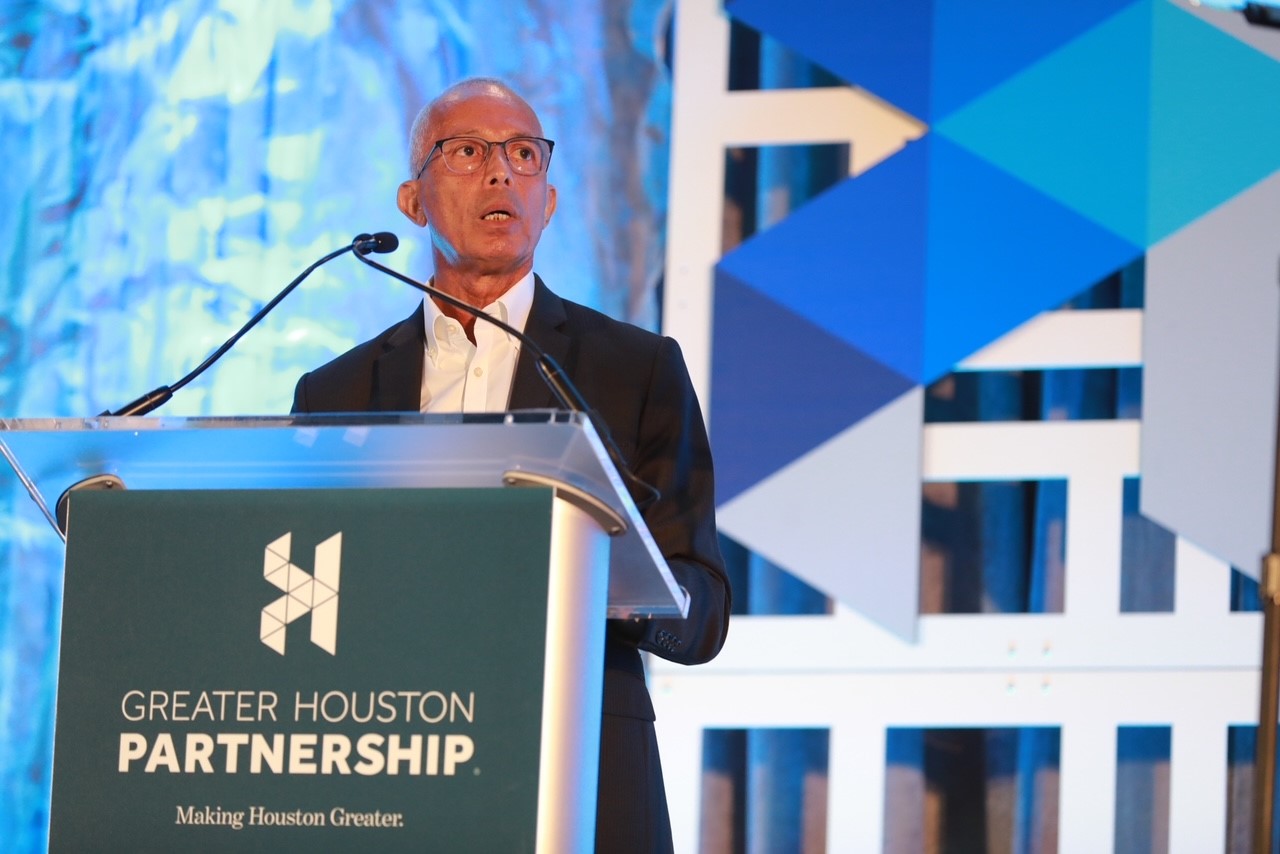 City of Houston Aviation Director Mario Diaz talked about the future of our region’s airports at the Greater Houston Partnership’s annual State of the Airports on October 22, 2021.

After a challenging year that's affected nearly every sector of Houston's global economy, Houston Airports is laying the foundation for a strong recovery in the years ahead.

That's the optimistic message City of Houston Aviation Director Mario Diaz brought in his keynote address during the Greater Houston Partnership's State of the Airports on October 22. Diaz shared the outlook for the region's airports in front of an audience of roughly 500 people. He detailed how 2021 has been the year to "build forward better" by expanding Houston's global connectivity, improving airport infrastructure to better serve travelers and advancing plans for space exploration and innovation.

Diaz gave an overview of domestic airlines that have entered the Houston market, as well as those that have expanded their presence here. Sun Country, for instance, added service to Cancun from George Bush Intercontinental Airport (IAH) and Allegiant Airlines at Hobby Airport has grown to serve eight markets since they started in June last year.

Diaz also noted the big news from earlier this year when Southwest Airlines returned to IAH after a 16-year absence, with 18 daily departures to nine nonstop destinations.

"We applauded the convenience Southwest Airlines now offers to passengers in Houston, no matter where they live," said Diaz.

Diaz also noted the increase in requests from airline partners for gates, and anticipates Houston Airports will add 24 gates in the coming years, with 17 of those at IAH and seven at Hobby.

"This will fuel our rebound and help us recover some of our non-airline revenue, which is critical for us to continue to expand our facilities and provide better experiences to our passengers," said Diaz, adding concessionaires, parkin and other non-airline sales are heading in the right direction.

Diaz said the IAH Terminal Redevelopment Program (ITRP) underway at IAH has made significant progress in the last year. The $1.3 billion international terminal program includes several projects, including construction of the new Mickey Leland International Terminal arrivals and departures hall, the federal inspection services area, the new D West Pier that will accommodate more wide-body aircraft to connect Houston to the rest of the world and completion of renovations to the Terminal D concourse.

"These projects are very complex, and while we build, we must remain operational, and we must minimize any impact to our passengers," said Diaz. "I assure you the dust we are making now will settle to reveal a world-class international gateway"

Diaz said the entire program is scheduled to be complete on time, beginning with the D West Pier in 2023 and renovations of the Terminal D concourse in 2024.

Diaz also noted infrastructure improvements happening at Hobby Airport with the intention of upgrading the travel experience for millions of people. The airport unveiled new "smart restrooms" in May featuring a modern design and built-in technology to ensure the restrooms are well-maintained and clean. Other improvements at Hobby Airport include 90,000 square feet of new quartz tile flooring and carpet in the central concourse, as well as a 1,300 square foot children's play area and interfaith chapel.

"These, and others to come, are the cluster of aerospace companies that will lead the nation in the transition from a government-focused to a commercially-driven space program," said Diaz.

Each company is pursuing ambitious plans to ensure Houston retains its moniker as Space City. Last December, Axiom Space announced it will build a 14-acre headquarters campus at the Houston Spaceport where the aerospace company plans to develop its Axiom Station, the world’s first free-flying, private space station. The project is expected to bring more than 1,000 jobs to the new campus. Just a few months later, Collins Aerospace, a division of Raytheon Technologies, announced its plans to build a new facility at the spaceport, hosting Houston’s first spaceflight incubator on an eight-acre, 120,000-square-foot campus. Finally, Houston-based Intuitive Machines is developing its Nova-C lunar lander to launch from Kennedy Space Center aboard a SpaceX rocket. This will be the first mission back to the moon in over 50 years and will also be the first commercial mission ever by any country on this planet.

Diaz noted the regional economic impact of these companies are critical.

"In all, this out-of-this world ecosystem will create nearly 13-hundred jobs in the next two to three years," Diaz said. "And we are ready to create a pipeline for the talent who will be at the forefront of the second space age — a trillion dollar industry."

"I'm thrilled at the momentum we have built at Houston Spaceport," said Diaz. "And more great things are on the horizon."

City of Houston Aviation Director Mario Diaz talked about the future of our region’s airports at the Greater Houston Partnership’s annual State of the Airports on October 22, 2021.