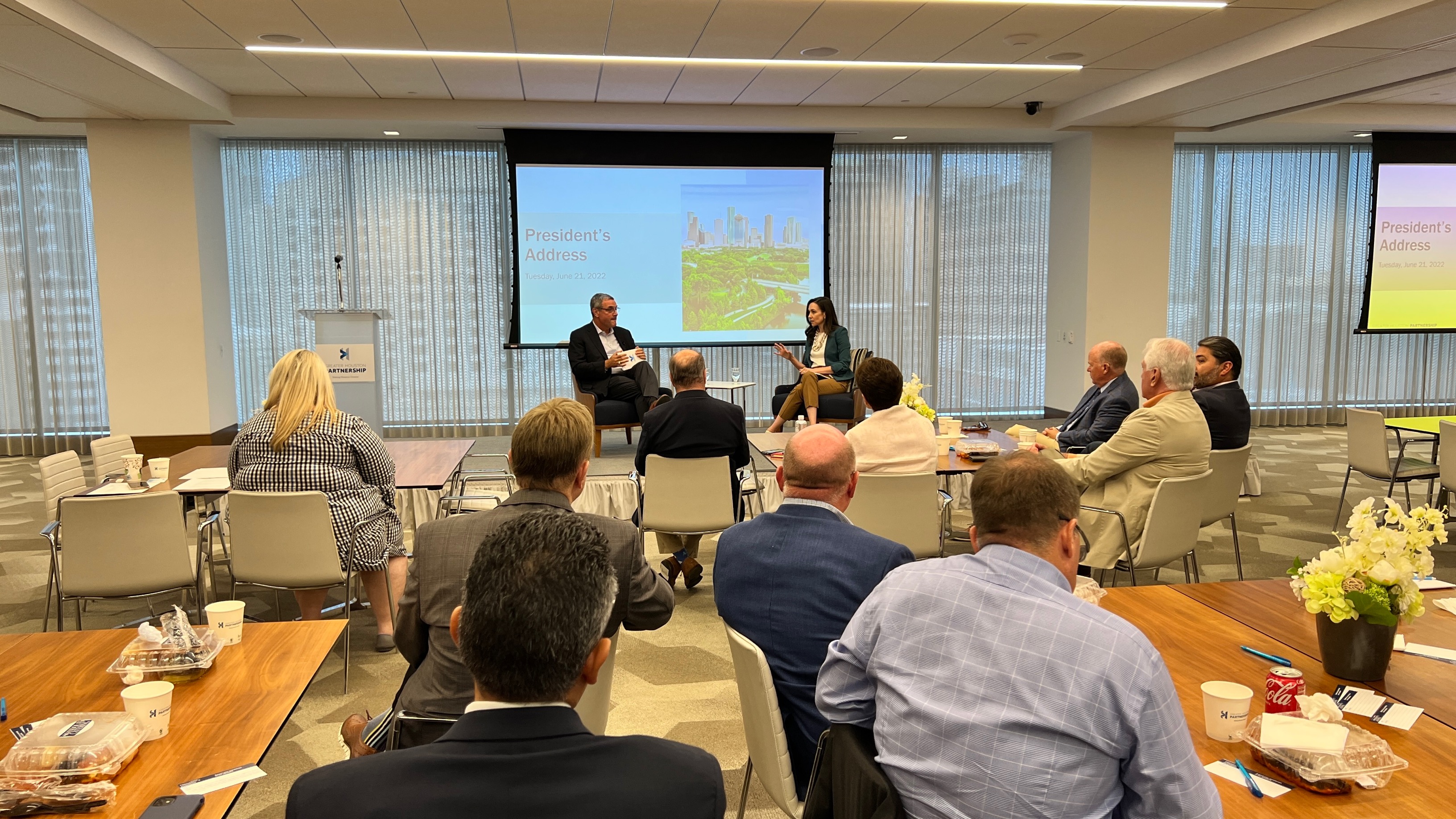 Bob Harvey and Katie Pryor present during the President's Address

The Partnership hosted the first in-person President’s Address this week for the organization’s members, with President and CEO Bob Harvey covering a variety of topics from economic development and public policy to energy transition and the rise in violent crime.

Harvey presented an overview of the organization’s recent work in these arenas before being joined by Partnership Chief Development Officer and SVP of Member Engagement Katie Pryor for a Q&A session.

Starting the conversation on the economic development front, Harvey said the Partnership has logged 14 project wins in the first five months of 2022. These represent $800 million in capital expenditures and 3,500 new and retained jobs in the region. In recent months, several Energy 2.0 companies announced plans in Houston, including Synthica Energy, which is developing a renewable natural gas facility on the Ship Channel, and Syzygy Plasmonics, which is moving its headquarters to Pearland to commercialize decarbonization technology for the heavy-chemicals sector.

Regarding public policy, Harvey told the audience that more than 60 members participated in the Partnership’s Washington D.C. Fly-In in the spring, which covered topics such as energy transition and large-scale infrastructure investments in the metro region. Looking ahead to the Texas Legislative Session that kicks off in January, Harvey said economic development incentives, higher education and energy transition are likely to be among the issues on the organization’s legislative agenda.

Harvey provided a brief update on the Partnership’s Houston Energy Transition Initiative, highlighting that four of the initiative’s working groups launched this spring. Those four working groups are focused on carbon capture use and storage, hydrogen, industry decarbonization and capital formation. A more robust update will come next week during the three-day Future of Global Energy conference June 28-30.

Noting the rise in violent crime here in Houston and around the country as well as growing anxiety around public safety, Harvey said a spectrum of local stakeholders will need to come together to identify solutions. A lack of courtroom availability as well as staffing shortages have led to a backlog in cases and a high rate of repeat offenders awaiting trial. Harvey said the Partnership is working in collaboration with local officials to help identify ways the business community can be part of the solution. He said he expects some movement in this arena in coming weeks.

Other topics of discussion included the region’s evolving innovation ecosystem, the Partnership’s racial equity work through One Houston Together and new workforce development efforts.

To attend an upcoming President’s Address and other Partnership events, view our events page and sign up for notifications when new events are posted.

Bob Harvey and Katie Pryor present during the President's Address