This issue of Houston: The Economy at a Glance looks at recent revisions to pandemic employment data for Houston and provides fresh insights into to the strength of the ongoing recovery.
Share
March 2021 Economy At A Glance

Job losses in the early stages of the pandemic were worse than first reported. The recovery has not progressed as far as once thought.

Job losses in the early stages of the pandemic were worse than first reported. The recovery has not progressed as far as once thought. For industries struggling prior to the shutdown, COVID-19 made things worse. And a full recovery is likely several years away.

Those are the conclusions from the Partnership’s analysis of the recent revisions to the employment data for ’19 and ’20. Earlier data came from employer surveys, and like all surveys, the results are subject to sampling, processing, and methodology errors. The revisions are based on administrative records, specifically data from the state’s unemployment insurance system, and thus reflect a more accurate picture of the pandemic’s impact. 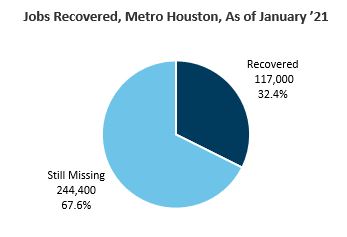 The pandemic destroyed four years of growth, all the gains made since the end of the Fracking Bust. Total payroll employment stood at 2,947,800 in January of ’21, roughly the same level as January ’17. 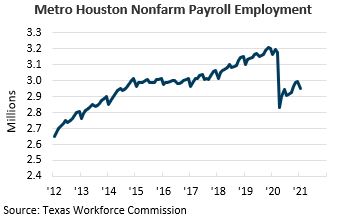 TWC reports employment data for 70 sectors and sub-sectors in metro Houston. All but three reported losses in the early stages of the pandemic.  Hiring jumped at food and beverage stores as consumers stockpiled nonperishables. Hardware stores added to their staff as residents tackled long-delayed home improvement projects. Consumers found they could purchase sweatpants, bottled water, toilet paper and board games all in one store. General merchandise stores hired additional checkers and stockers to handle the surge in demand.

Four sectors accounted for over half the pandemic job losses: health care, other services, restaurants and bars, and retail. All suffered under government mandates that shut them down or restricted their operations early in the pandemic. Their losses totaled 207,400 jobs. All benefited from the lifting of government mandates. At present, this group has recouped two-thirds of its losses (137,900 jobs). These sectors aren’t holding back the recovery.

Three subsectors have recouped all their losses: insurance, computer systems and design, and transportation and warehousing. The first two lost only a few jobs and recovered quickly. 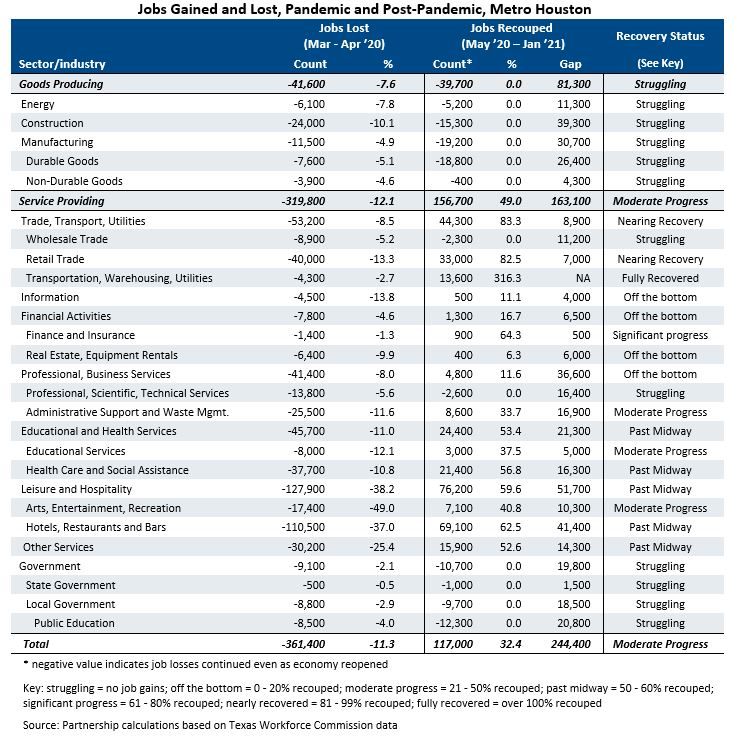 TWC doesn’t provide enough detail to determine where the gains in transportation and warehousing came from. The agency publishes nothing on waterborne and rail transportation. The available data on airlines, pipelines, and trucking show those sectors are struggling. The pandemic saw a surge in online shopping, which placed a greater demand on package delivery services. And the region grew as a distribution hub, absorbing more than 14 million square feet of warehouse space. Presumably, the job gains in transportation are in these areas.

Here are the facts to know about the Houston region this month
1
March Takeaway #1
Metro Houston lost 361,400 jobs in March and April, 11,200 more than first reported. That exceeds the combined job losses from the ’80s oil bust (226,100) and the Great Recession (120,500).
2
March Takeaway #2
Through January, Houston sat 244,400 jobs below pre-pandemic levels. The region has recovered only 117,000 of the jobs, about one-third of those lost in the recession.
3
March Takeaway #3
Three subsectors have recouped all their losses: insurance, computer systems and design, and transportation and warehousing. The first two lost only a few jobs and recovered quickly.
Like this article? Share with your network