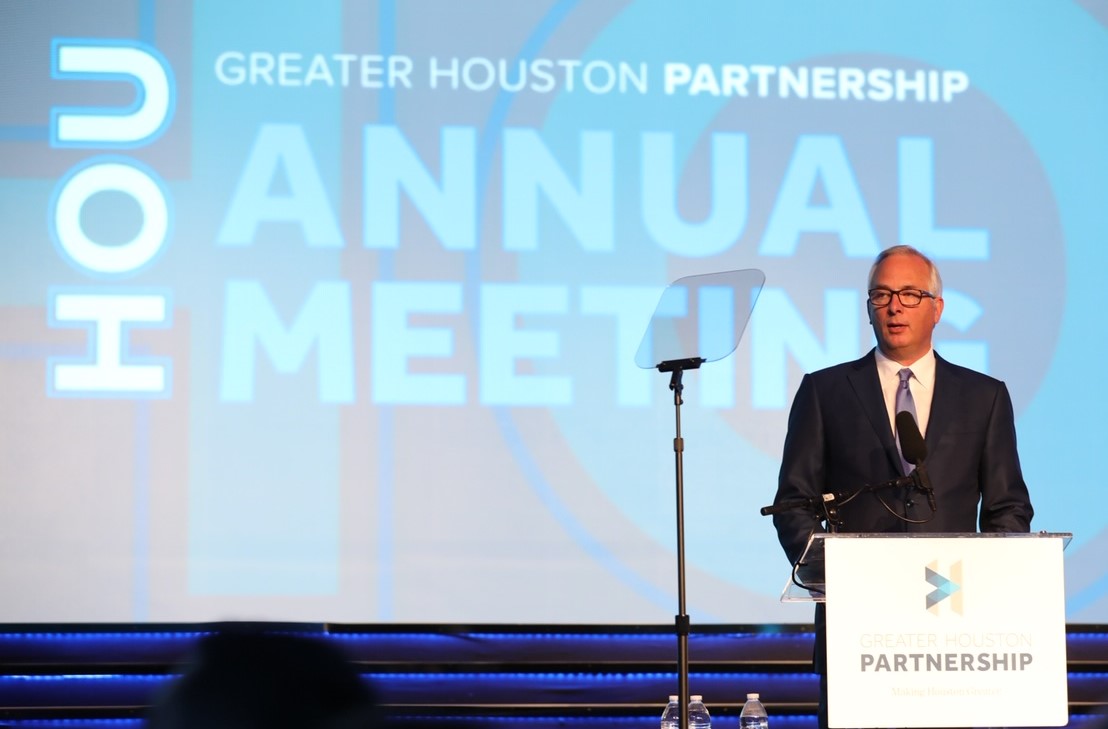 HOUSTON (January 22, 2020) - Greater Houston Partnership 2020 Board Chair Bobby Tudor outlined how the organization will work to ensure Houston plays a key role in the global energy transition at the Partnership’s annual meeting on January 22.

Read the remarks from Bobby Tudor and Bob Harvey and see Bobby Tudor's slide presentation. Watch the full meeting below.

“The economic vitality and growth of our region’s economy is inextricably tied to the energy industry,” Tudor said, adding that the Partnership and its members “should use our convening power to rally our companies, political leaders and fellow citizens to position Houston as the city that will lead this energy transition.”

The Partnership will launch a new initiative aimed at accelerating Houston’s activity around energy transition, while existing committees will continue efforts to bring energy tech and renewable energy companies to Houston; explore the policy dimensions of carbon capture, use, and storage; and advocate for legislation that helps ensure the Texas Gulf Coast is positioned as a leader in that technology.

Houston business leaders have a responsibility to lead the transition to a cleaner, more efficient and more sustainable, low-carbon world, Tudor said. “We need to be the driver, not the passenger.”

Highlighting some of the changes and milestones reached in Houston over the last decade*, Partnership President and CEO Bob Harvey said that while the last 10 years were transformational for Houston, the next decade may be to be even more critical to the region’s long-term success. “I believe the decisions we make and the work we do together in the next few years will determine the trajectory of Houston for the next several decades and beyond,” Harvey said.

The Partnership’s 2019 Board Chair, Scott McClelland, said he was pleased with the organization’s successful efforts on major initiatives last year. Through its public policy committees, the Partnership influenced key bills during the 86th Texas Legislative Session, including House Bill 3 that brought $5 billion in new state funding into the public education system and Senate Bill 7 that resulted in $2 billion in state funding for statewide recovery and future flood mitigation.

“If there’s one big thing I learned over the last year, it’s that the key to making this city better for everyone is having a lot of Houstonians involved in the effort,” said McClelland, president of H-E-B. “There’s power in numbers. It’s a force multiplier.”

Harvey also pointed to Houston’s recent success in bolstering its innovation ecosystem—a move critical to the region’s ability to compete with other global cities. Last summer, Rice University broke ground on The Ion, a 270,000-square-foot innovation center that will anchor the broader 16-acre South Main Innovation District. Other startup incubators and accelerators have opened their doors throughout the city in recent months, including MassChallenge, The Cannon, Gener8tor, Plug and Play and more. The Partnership also played a role in fintech company Bill.com opening its first office outside of Silicon Valley here in Houston in September.

In January 2019, the Partnership launched a new strategic initiative, Houston Next, and a complementary $50 million capital campaign to support the effort. Designed to advance Houston’s position as a great global city, the plan focuses on three core areas: creating a strong, diverse 21st-century economy, ensuring a great quality of life and supporting opportunity for all. Houston Next aims to empower local business leaders to accelerate the region’s progress at the intersection of those three areas of impact and ensure Houston’s continued success. Harvey said the Partnership is well underway toward meeting its Houston Next objectives and reported that the campaign has raised $25 million, half of its goal.

*The last decade was one of the most transformative in Houston’s history. Consider:

•    The region added more than 1.1 million residents over the last 10 years an increase of more than 18 percent.
•    Houston became the most diverse city in the nation, now led by its Hispanic population and the fastest growing Asian population in America.
•    The Houston region added $64 billion to its GDP, a 17 percent increase in real terms.
•    Foreign trade expanded by nearly $24 billion, making Houston the most trade focused metropolitan area in the nation.
•    Houston added 615,000 net new jobs over the last decade.

Greater Houston Partnership
The Greater Houston Partnership works to make Houston one of the best places to live, work and build a business. As the economic development organization for the Houston region, the Partnership champions growth across 11 counties by bringing together business and civic-minded leaders who are dedicated to the area’s long-term success. Representing 1,100 member organizations and approximately one-fifth of the region’s workforce, the Partnership is the place business leaders come together to make an impact. Learn more at Houston.org.