THINGS ARE LOOKING UP

It’s been a year since the COVID-19 virus struck the U.S., sending the nation into quarantine and precipitating one of the deepest recessions on record.

Since then, the U.S. has made a remarkable recovery. Real GDP grew 33.4 percent in Q3/20 and 4.3 percent in Q4/20. When the Bureau of Economic Analysis (BEA) releases GDP estimates for Q1/21 later this month, the bureau’s likely to report GDP has already returned to pre-pandemic levels.

The U.S. will enjoy robust growth this year and well into next. In its April ’21 survey of prominent U.S. economists, The Wall Street Journal found that over half the respondents expect U.S. GDP growth of 6.3 percent or better this year. By comparison, U.S. GDP growth has averaged 2.5 percent per year over the last three decades. According to the Journal survey, growth will average 3.2 percent in ’22 before settling down to 2.4 percent in ’23.

Job growth will be healthy, but it will take longer for the nation to reach pre-pandemic employment levels. Since April of last year, the nation has added over 14.0 million jobs, about two-thirds (62.4 percent) of the recession losses. In the same Journal survey, roughly half the respondents expect growth to average 500,000 jobs or less over the next 12 months. Only a handful expect growth to exceed 700,000 jobs per month, the pace needed for the U.S. to recoup all the recession losses by this time next year. Several outlier forecasts pull the average up to 546,000 jobs per month. If growth does indeed occur at that pace, by this time next year the U.S. will still fall 1.9 million jobs short of where it stood prior to the pandemic. 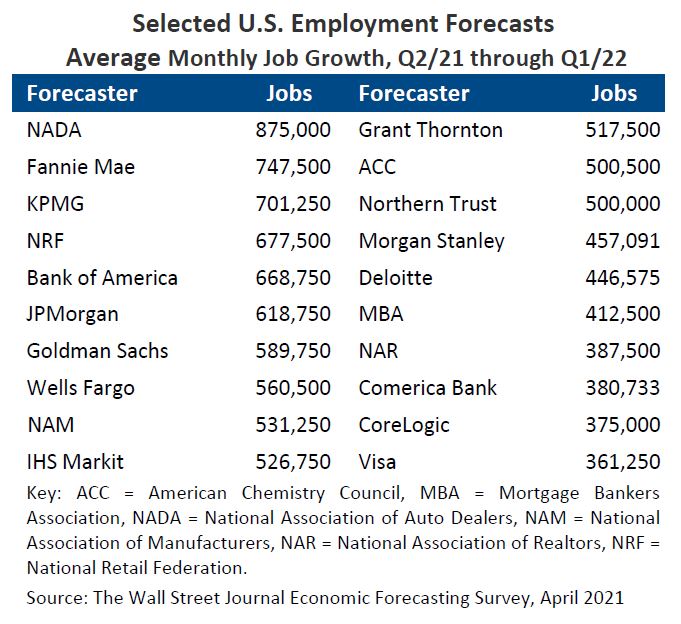 The National Association for Business Economics (NABE) surveyed its members around the same time the Journal conducted its survey. NABE’s outlook is a bit tamer, with GDP growth averaging 4.8 percent this year. Fifty-nine percent of the respondents in the NABE survey don’t expect U.S employment to reach pre-pandemic employment levels until ’23 or later.

The nation has made progress in reducing the number of hourly, salaried, gig and self-employed workers claiming unemployment benefits. During the first week of April, 18.1 million Americans filed claims, down 45 percent from the peak in July of last year. Filings are still abnormally high, however. In February ’20, the month prior to the pandemic, claims averaged 2.1 million each week.

The economy is improving because more people are getting vaccinated, states are lifting stay-at-home restrictions, consumers are more comfortable with shopping and dining out, people are traveling more outside the home, and the three federal stimulus plans passed by Congress in the past 12 months have injected trillions into the economy.

All this bodes well for Houston, which needs a robust U.S. recovery to drive the local recovery. As of February ’21 (the most current data available), Houston had recouped only 128,400 of the 361,100 jobs lost in the pandemic. That’s 35.2 percent compared to 62.4 percent for the nation.

February was a particularly weak month for the region. Houston created only 6,900 jobs, well below the 20-year average of 21,100 jobs for the month. Houston’s poor performance was due to the winter freeze, which caused massive power outages, forced businesses to close, and kept consumers at home.  The outages also impeded the Texas Workforce Commission’s ability to gather the data needed to produce its monthly employment reports.  Other indicators, like the Houston Purchasing Managers Index (see page 4) and sales tax collections, indicate Houston’s recovery is a bit stronger than the employment data suggests.

But rising headwinds may slow the U.S. recovery. A U.S. Census Bureau survey conducted in March found that 4.2 million adults are unemployed and have stopped looking for work because they fear contracting the virus. That may explain why companies are finding it difficult to fill open positions. In March, 42 percent of small business owners reported they had job openings they could not fill, according to a recent survey by the National Federation of Independent Businesses. That’s 20 points higher than the 48-year historical average of 22 percent. And in NABE’s January survey, 28 percent of respondents reported difficulty finding skilled workers. The U.S. labor market won’t fully heal until the virus is tamed.

Past issues of Glance have stressed that Houston’s recovery will be prolonged. If Houston can grow at the same pace as projected for the U.S. in the Journal survey, the region would create 135,000 jobs over the next 12 months. That would still leave Houston 100,000 jobs shy of its pre-pandemic levels.  And the region must deal with a struggling energy industry, an overbuilt commercial real estate market, slower population growth, and a weak recovery overseas.

These and other factors will weigh on Houston’s growth over the next 12 months. The bottom line is that full employment recovery for Houston is two to three years away.

Houston’s digital tech workforce grew last year, nudging the metro up to 11th place, ahead of Philadelphia but behind Atlanta in the rankings of the nation’s major tech centers. That’s according to Cyberstates 2021, the Computing Technology Industry Association’s (CompTIA) annual assessment of the U.S. tech sector.

The region added 8,100 tech workers in ’20, according to CompTIA’s estimates, bringing the total to 243,900.  Houston overtook Detroit, which lost tech workers last year. 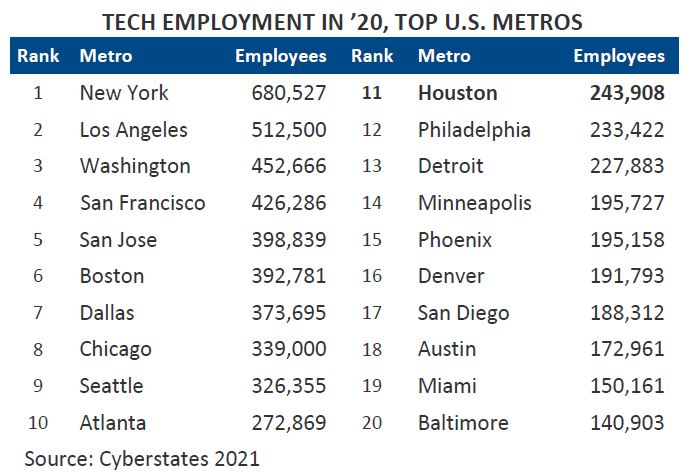 Cyberstates, which provides data for the U.S., all 50 states, and 46 major metro areas, is a respected and widely cited annual guide to the U.S. tech sector. The guide looks at all sectors involved in making, creating, enabling, integrating, and supporting technology in a region, whether as a product or service. One of the guide’s greatest strengths is that it examines a region’s tech workforce by occupation as well as industry, even when the occupation is in an industry most don’t consider “tech.” This helps level the playing field. For example, a web developer at Chevron would make the tech workforce tally for Cyberstates even though Chevron is not typically recognized as a tech company.

Fewer than a quarter of Houston’s net tech workers are in technical occupations at “tech” companies. That’s the lowest share of any Top 20 metro and it helps to explain why Houston isn’t a more visible tech hub. But it doesn’t mean the region lacks talent. 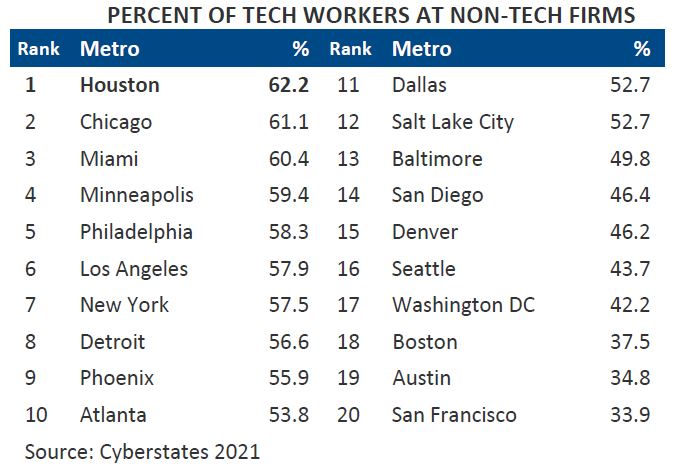 Data in the Cyberstates report makes obvious the differences in the tech sectors of Texas top three metros. Dallas’s tech industry is weighted toward IT services, telecommunications and internet services, no surprise considering Dallas is home to AT&T. Austin’s tech industry has a strong presence in Tech Manufacturing, a nod to its chip manufacturing sector and computer makers like Dell and Apple. Houston’s tech sector is weighted toward research and development, testing and engineering services. Houston has more tech workers in R&D and engineering (68,782) than Austin and Dallas combined.

Here are the facts to know about the Houston region this month
1
April Takeaway #1
The U.S. has made a remarkable recovery. Real GDP grew 33.4 percent in Q3/20 and 4.3 percent in Q4/20. When the Bureau of Economic Analysis (BEA) releases GDP estimates for Q1/21 later this month, the bureau’s likely to report GDP has already returned to pre-pandemic levels.
2
April Takeaway #2
If Houston can grow at the same pace as projected for the U.S. in the Journal survey, the region would create 135,000 jobs over the next 12 months. That would still leave Houston 100,000 jobs shy of its pre-pandemic levels.
3
April Takeaway #3
Houston’s digital tech workforce grew last year, nudging the metro up to 11th place, ahead of Philadelphia but behind Atlanta in the rankings of the nation’s major tech centers. The region added 8,100 tech workers in ’20, according to CompTIA’s estimates, bringing the total to 243,900.