In this edition, we explore booming home sales as part of the robust, reopening U.S. economy
Share
May 2021 Economy at a Glance

Houston is set for another banner year in home sales.

Houston is set for another banner year in home sales. Zonda, a national real estate consulting firm, expects builders to break ground on as many as 36,000 single-family homes this year. That’s in line with last year’s robust construction. Regarding resale homes, John Burns Consulting expects Houston brokers to close on 105,800 this year, up from 91,567 in ’20.

Houston’s housing market is part of a national trend. Data from the U.S. Department of Housing and Urban Development show the nation is on track to build 1.3 million new homes in ’21, the fastest pace since December ’08. The National Association of Realtors forecasts existing home sales to top 6.0 million this year, up from 5.6 million last year. That’s more than at any time since the housing bubble 15 years ago.

Several factors, not just low interest rates, are driving the boom. It helps that the U.S. is enjoying robust economic growth. The U.S. Bureau of Economic Analysis reports real gross domestic product (GDP) grew at a 6.4 percent annual rate in Q1/21, the fastest rate of growth since Q1/03.

The robust recovery has boosted job growth. The U.S. has recouped 14.1 million of the 22.4 million jobs lost in the COVID-19 pandemic. Through the first four months of this year, the nation has created 1.8 million jobs. Though April job growth was weaker than expected, the nation should add 4.0 to 6.0 million jobs this year.

Job growth is especially strong for occupations at the high end of the wage scale. According to Economic Tracker, a recovery monitoring tool developed by economists at Harvard University, the U.S. now has more jobs paying $60,000 or above than it did prior to the recession. That suggests there are more workers with the wherewithal to purchase a home than prior to the recession. 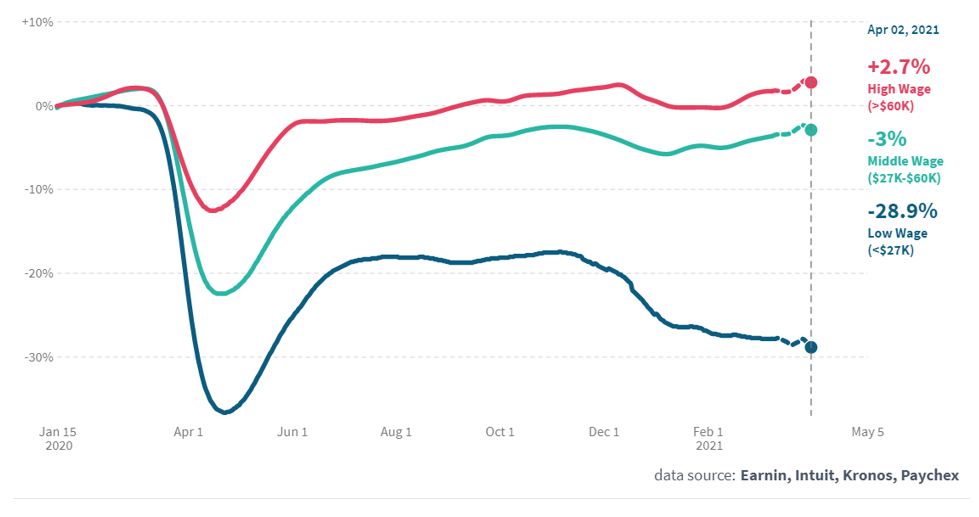 Household finances are also in the best shape they’ve been in years. Only 2.1 percent of all credit card debt was delinquent in Q4/20, down from 6.8 percent at the height of the Great Recession, according to the Federal Reserve Board of Governors. And debt service as a percent of disposable personal income is the lowest it’s been since the Fed started keeping track in the early ’80s. 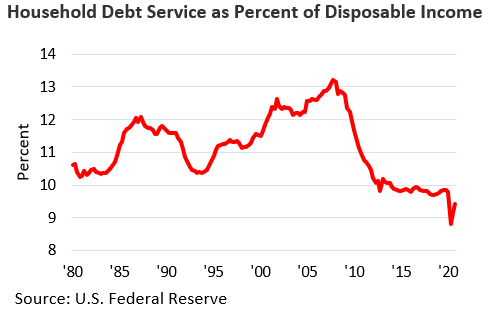 During the pandemic, Americans were forced to stay home. No travel. No dining out. No tickets to the opera, baseball, football, or ballet. Much of the money that would have been spent in these pursuits was saved, leaving many with a nest egg they could use as a down payment. Personal saving as a share of disposable personal income rose from 8.3 percent prior to the pandemic to 33.7 percent at the height of the pandemic.

The three stimulus packages passed by Congress since March of last year have helped as well. According to a recent survey by the Federal Reserve Bank of New York, many Americans who received stimulus checks used the money to either pay off debts or save for a major purchase.

And of course, it helps that interest rates are at their lowest level in 30 years, making monthly payments more affordable. In early May, the average fixed rate for a 30-year mortgage was 2.96 percent, compared to 3.65 percent in January ’20 and 4.51 percent in January ’19. 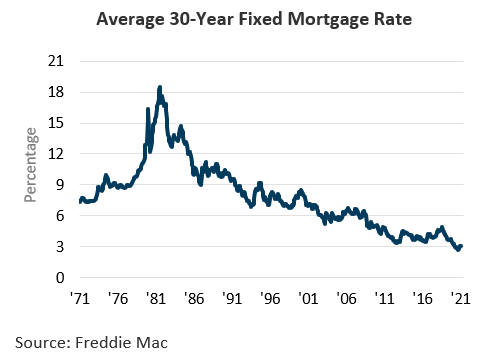 Demographics have helped as well. Millennials, who now comprise the largest living cohort, have arrived at the age where they’re forming new households and buying their first home. According to CoreLogic, a real estate data analytics firm, millennials accounted for 54 percent of all home purchases in ’20, up from 34 percent in ’14.

And although many businesses have either reopened or soon will, employees will continue to work from home, at least part-time, and are looking for homes more conducive to working remotely.

The surge in demand has cause home prices to soar. In March, the median single-family home in the U.S. sold for a record $334,500, up 18.4 percent from March ’20, and typically spent just 18 days on the market, according to the National Association of Realtors.

Here are the facts to know about the Houston region this month
1
May Takeaway #1
The U.S. has recouped 14.1 million of the 22.4 million jobs lost in the COVID-19 pandemic.
2
May Takeaway #2
The median price for an existing home sold in Houston was $273,700 in Q4/20, compared to $447,915 for the nation’s 20 most populous metros.
3
May Takeaway #3
Home prices in Houston are appreciating near the national rate. Data provided by the Houston Association of Realtors shows that over the past 12 months the average sales price for an existing single-family home rose 16.0 percent, or $40,000.