In this edition, we explore Houston's reopening economy, the pandemic recovery, $70 oil and more.
Share
June 2021 Economy at a Glance

The Partnership conducted a major survey of its members in early June to help local employees see how others are handling the tough issues surrounding reopening.

Most Partnership members will have fully reopened their offices by the end of June, if they have not done so already. The process varies though, with as many firms requiring employees in the office five days a week as require two days or less. The hybrid environment has forced many to rethink their real estate needs as well, with over 20 percent planning to eventually reduce their footprint.

Those are the major conclusions from a survey the Partnership conducted of its members in early June. Responses came from 140 companies in 15 industries. Roughly one-third of respondents had 500 or more employees, one-third 51 to 500 employees, and one third 50 or fewer employees. The Partnership conducted the survey to help local employees see how others are handling the tough issues surrounding reopening.

When asked about reopening, half (50 percent) of survey respondents either never closed or have already resumed full operations; another 16 percent are opening in June. By September, 90 percent expect to have fully reopened. 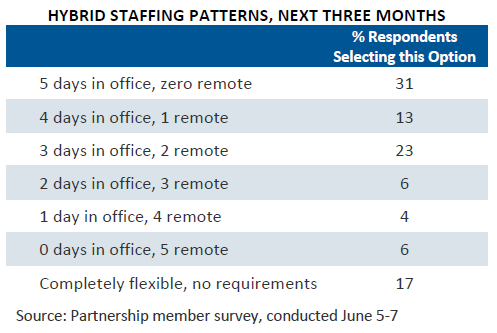 Three-fourths of the responses came from four sectors: energy (upstream, midstream, power, renewables), F.I.R.E. (finance, insurance, and real estate), non-profit organizations, and professional services. Non-profits and professional services lean toward requiring their employees in the office three days or less each week. Firms in energy and F.I.R.E are split between four to five days per week and three days or less.

The survey found that only 8 percent of respondents are requiring vaccinations as a condition of return to work. However, one-fourth offer a tangible, monetary, or time-off reward for getting vaccinated.

A little over half (52 percent) are tracking employee vaccinations. Of those, about a third (36 percent) require proof and another third (33 percent) are conducting non-anonymous surveys.

Over half of all respondents (55 percent) require non-vaccinated employees to wear masks. The rest are split between mandating masks for all (22 percent) and mandating masks regardless of vaccination status (24 percent).

Here are the facts to know about the Houston region this month
1
June Takeaway #1
Metro Houston created 18,700 jobs in April, the third best April on record.
2
June Takeaway #2
The Houston apartment market has reached a tipping point. According to Apartment Data Services (ADS), overall occupancy hit 90.1 percent in May. Rates over 90 percent signal a landlord friendly market, rates under 90 percent a tenant friendly market.
3
June Takeaway #3
West Texas Intermediate, the U.S. benchmark for light, sweet crude, has traded near $70 per barrel since early June, a level not seen since October ’18.
Like this article? Share with your network