In this edition, we explore the energy transition, recovery bottlenecks, the worker shortage and more.
Share
July 2021 Economy at a Glance

Houston is called to solve a global challenge of extreme magnitude—how to meet growing global demand for energy while at the same time dramatically lowering climate-changing greenhouse gas emissions.

In late June, the Greater Houston Partnership released its blueprint for leading the global transition from traditional fuel sources to low-carbon and no-carbon energy. Titled, “Houston, Leading the Transition to a Low-Carbon World,” the report leads with four key points:

Houston is called to solve a global challenge of extreme magnitude—how to meet growing global demand for energy while at the same time dramatically lowering climate-changing greenhouse gas emissions.

There’s a great deal at stake for the region. As the energy industry becomes more efficient at finding and producing oil and gas, it will continue to shed jobs.  Houston has lost over 100,000 energy-related jobs in the past six years. That doesn’t include the indirect jobs, those created when the oil and gas workers spend their paychecks in local stores, restaurants, spas and consumer-oriented businesses.

If the region continues to conduct business as usual, the economy will continue to contract. Houston could lose another 270,000 jobs over the next 30 years, according to estimates from McKinsey & Co. That could rise to 370,000 jobs if the world accelerates to low-carbon future, and as many as 650,000 if the world takes dramatic steps to prevent global temperatures from rising by more than 1.5 degrees Celsius. That would be prompted by a 90 percent drop in emissions, as set out in the Paris Agreement.

Houston is well positioned to lead the transition, the plan notes. The region has a large, diverse, and technically oriented workforce. It has the most highly developed of energy infrastructure in the nation. A large and expanding renewable generation capacity is already in place. The local culture supports innovation and growth. And the region’s extensive port, rail and aviation systems offer a platform for large-scale decarbonization initiatives.

The later includes everything from nature-based solutions, to cleaner production of natural gas, oil, and petrochemicals, to breakthroughs in energy efficiency, geo-thermal energy, and advanced materials.

The Partnership took a deep dive into industry and economic trends to develop the plan. The organization also conducted interviews with over 60 business, government, and academic leaders. The strategy is meant to complement existing energy initiatives of the City of Houston, the Center for Houston’s Future, Rice University’s Baker Institute, and ExxonMobil’s proposal for a $100 billion carbon capture zone along the Houston Ship Channel.

In summary, the plan builds on the best traditional 20th century energy skills and systems and paves the way for a 21st century net-zero emissions world. The full document, along with a recap of the three-day conference at which it was released, can be found at the Partnership’s website. https://www.houston.org/energyconference

WHAT’S HOLDING BACK THE RECOVERY?

Metro Houston added 48,600 jobs through the first six months of this year. That brings the total recouped since the economy reopened last May to 213,500, just under 60 percent of the pandemic job losses. 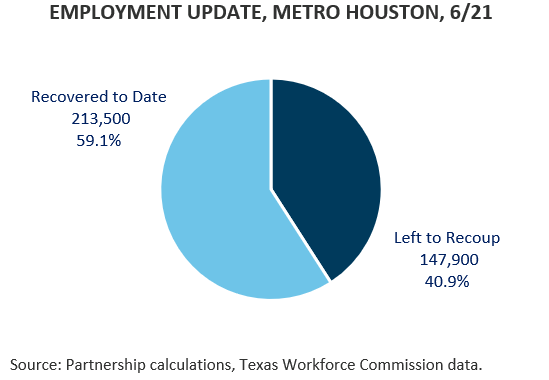 If the economy follows historic patterns, Houston will lose jobs in July, mainly educators out of work during the summer. Job growth will resume in August and gain momentum in the fall. The last of the pandemic-related unemployment benefits are set to expire in September, which should compel workers still on the sidelines to seek employment.

Though well underway, the recovery remains uneven, with some sectors recouping nearly all their lost jobs while other continue to shed workers.

Sectors which suffered the most from social distancing mandates last March and April have benefited most from reopening. As a group, arts and recreation, health care, other services (barbershops, nail salons, dry cleaners), retailers, restaurants, and bars shed 224,800 jobs. They accounted for 62.2 percent of the region’s losses. Since May ’20, they’ve recouped 200,700 jobs, accounting for 94.0 percent of the region’s gains.

Four categories still struggle: construction, energy, manufacturing, and wholesale trade. They continued to shed jobs as the economy reopened. As a group, they account for 77,500 lost jobs, or 52.4 percent of the remaining gap. COVID restrictions impacted these sectors early on, but structural and economic changes continue to stifle growth, delaying our return to pre-pandemic employment levels.

Holding Back the Recovery

The recent surge in oil prices has not supported an increase in U.S. drilling. Roughly half of U.S. production is hedged at $45 to $50 per barrel this year. Exploration firms are using any increase in cash flow to pay down debt or pay dividends to investors and shareholders. And Wall Street remains reluctant to provide additional capital. As a result, the U.S. drilling rig count has been slow to recover, and with it Houston manufacturing jobs. 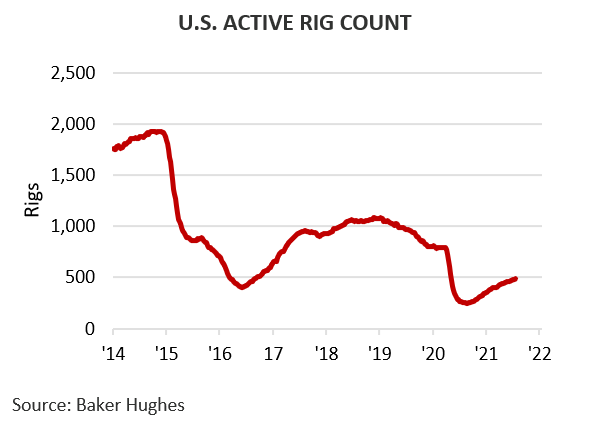 A handful of forecasters expect the price of crude to reach $100 within the next 12 months, but that’s unlikely. Saudi Arabia worries that if crude stays above $75 per barrel for long U.S. shale production will ramp back up. The Arab nation also worries that high crude will accelerate the global shift to alternative energy sources. OPEC still has 8.1 million barrels of spare capacity it could easily bring online.

The energy industry also faces challenges from policy makers, environmentalists, and activist investors. These challenges limit the industry’s ability to increase production, and this has ramifications down the entire supply chain. All but a handful of the manufacturing job losses are related to the assembly of oilfield equipment and fabricated metal products (pipes, valves, flanges). Houston is unlikely to see a recovery in manufacturing jobs without a recovery in the rig count.

Here are the facts to know about the Houston region this month
1
July Takeaway #1
If the region continues to conduct business as usual [no energy transition], the economy will continue to contract. Houston could lose another 270,000 jobs over the next 30 years, according to estimates from McKinsey & Co. That could rise to 370,000 jobs if the world accelerates to low-carbon future, and as many as 650,000 if the world takes dramatic steps to prevent global temperatures from rising by more than 1.5 degrees Celsius.
2
July Takeaway #2
Construction accounts for roughly one-fourth of the region’s remaining losses. The boom in single-family construction hasn’t been enough to offset the slowdown in office, industrial, retail, and multifamily construction.
3
July Takeaway #3
The local unemployment rate continues to wobble, dipping one month and ticking up the next. The Texas Workforce Commission (TWC) reports that Houston’s rate hit 7.4 per-cent in June, up from 6.7 percent in May. The rate peaked at 14.0 percent in April ’20 and has trended down since. However, it will continue to wobble in the coming months.
Like this article? Share with your network