In this edition, we explore the delta variant, rebounding travel, economic growth and population gains in the metro area over the past decade.
Share
August 2021 Economy at a Glance

The U.S. economy keeps chugging along, even as the nation deals with a fourth wave of the coronavirus. Houston’s prospects continue to improve, but the region’s recovery lags that of its peers. Even though the Delta variant is overwhelming hospitals, it’s unlikely to derail the recovery.

U.S. job growth accelerated in recent months. Employers created 943,000 jobs in July, according to the U.S. Bureau of Labor Statistics. That’s on top of the 938,000 created in June and 614,000 in May. Since May ’20, the nation has created over 16.7 million jobs, recouping three-fourths of all those lost in the pandemic. After the Great Recession, it took 40 months to reach this point in the recovery. 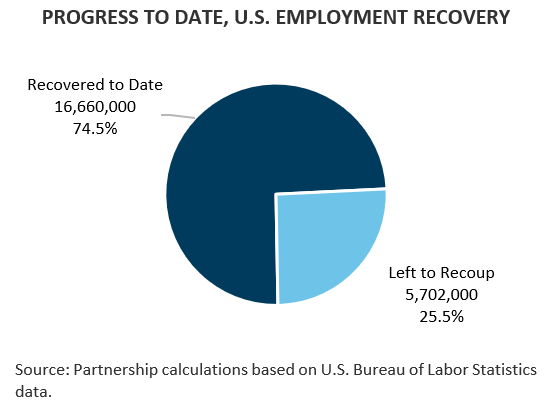 The U.S. should add between 240,000 and 660,000 jobs per month through Q2/22, according to the most recent Wall Street Journal survey of U.S. economists. If the U.S. job growth simply tracks the survey’s average (485,000 per month), the nation will recoup all jobs lost in the recession by this time next year. That would mark one of the quickest employment recoveries on record. 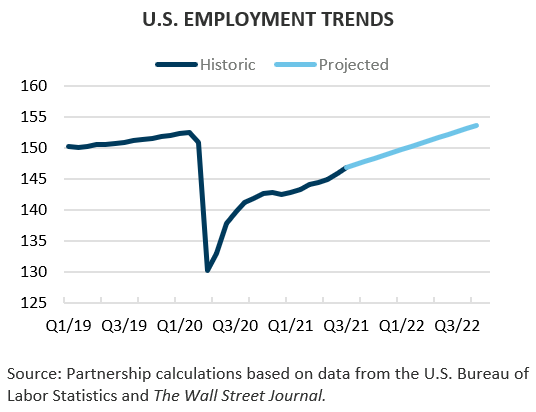 Over 12.1 million workers filed continued claims for unemployment benefits the week ending July 24. This includes those receiving state benefits as well as those receiving federal pandemic assistance. That’s down from 29.0 million continued claims same week last year. The drop in continued claims suggests that it has become easier for Americans to find work.
Initial claims, a proxy for layoffs, are down as well. According to the U.S. Employment and Training Administration, the four-week average has hovered around 400,000 since mid-June. (Using a four-week average helps smooth out fluctuations in the data.) That’s down from 5.1 million at the April ’20 peak but still above the long-term average of 170,000 per week prior to the pandemic.

GDP grew 6.5 percent in Q2/21 after adjusting for inflation, according to the U.S. Bureau of Economic Analysis. The average forecast among the 60 economists polled by The Wall Street Journal in April was for the U.S. to grow 9.1 percent in Q2. A Bloomberg survey placed growth at 8.4 percent. While growth fell short of expectations, it still landed well above the 20-year average of 2.0 percent. GDP growth should remain healthy through the end of ’22, tapering off in ’23 as benefits of the stimulus packages passed during the pandemic fully dissipate. 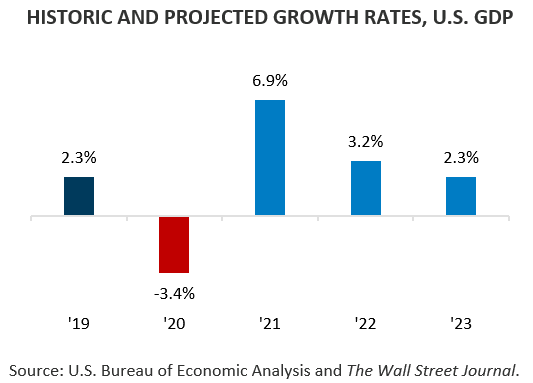 Even after adjusting for inflation, GDP now exceeds pre-pandemic levels, an achievement reached even through the U.S. employs 5.7 million fewer workers now than it did prior to the pandemic. 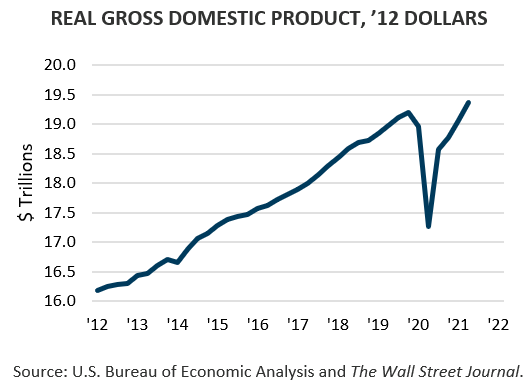 The latest reports from The Institute for Supply Management (ISM) indicates the U.S. manufacturing and services sectors continue to expand.

Readings above 50 reflects expansion in the sector while readings below 50 indicate the sector is contracting.

The recovery faces several challenges, however. Employers are struggling to hire workers. In its July survey, the National Federation of Independent Businesses found that 49 percent of its members had job openings they couldn’t fill. That’s well above the 48-year average of 22 percent. In its most-recent Job Openings and Labor Turnover Survey (JOLTS), BLS reported over 10 million job openings in the U.S. Employers always have openings as businesses expand or employees quit to find work elsewhere, but openings averaged 6.4 million in the five years prior to the pandemic. 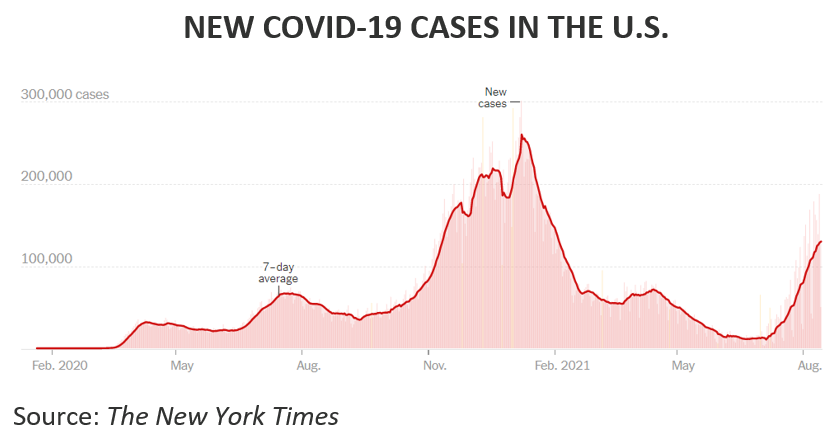 Here are the facts to know about the Houston region this month
1
August Takeaway #1
The biggest threat to the recovery is the surge in the Delta variant of the virus. According to data compiled by The New York Times, cases were up 64 percent nationwide, hospitalizations 65 percent, and deaths 113 percent in the two weeks ending August 14. For metro Houston, cases were up 24 percent, hospitalizations 106 percent, and deaths 126 percent.
2
August Takeaway #2
Most metros have enjoyed a V-shaped recovery (steep decline followed by rapid growth). Houston, however, is suffering through a K-shaped recovery (some industries growing quickly while others continue to decline).
3
August Takeaway #3
The economic outlook is bright for Houston this year and into next, according to the latest projections from The Perryman Group, the Waco-based think tank that’s been analyzing and forecasting for U.S., Texas, and Texas metros since the early 1980s. Perryman calls for Houston’s real gross product (RGP) to grow 5.1 percent this year (December to December) and 5.3 percent next year.
Like this article? Share with your network