In this edition, we explore employment, oil and gas, containerized exports, and the housing and apartments markets.
Share
September 2021 Economy at a Glance

Houston lost 7,100 jobs in July, which was better than expected. The region typically loses 15,000 or more in the month, the losses associated with educators being away from campus during the summer break.

The sectors most impacted by social distancing early in the pandemic are now at or near full recovery. Restaurants and bars have recouped 100 percent of their losses, retail 90 percent, other services (i.e., personal services), 80 percent.

Construction continues to struggle, cutting another 2,000 jobs in July. The boom in home-building hasn’t offset the slowdown in industrial, office and retail construction. The energy industry continues to restructure, laying off 500 workers in July, and will likely shed more jobs over the next few months. The gains in manufacturing came in fabricated metal products, presumably driven by energy companies placing new orders for pipes, valves, and flanges. 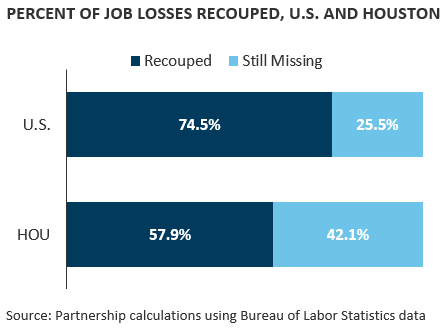 The data reflects employment as of mid-July—before the Delta variant began to surge. Delta’s impact won’t appear in the employment data until the August report is released, which won’t be until late September. If consumers, out of fear, stop dining out, visiting bars, and attending events, that will impede Houston’s recovery. The region might backslide a bit, but significant losses like those of last March and April are unlikely. Consumers want to get out of the house and be with family and friends. For some people, it’s a calculated risk. Others just don’t care.

The Next Four Months

The unemployment rate for metro Houston continues to improve but remains above that of Texas and the U.S.

The Texas Workforce Commission (TWC) estimates there are 240,000 Houstonians who are unemployed and actively looking for work, a dramatic improvement from the 470,000 out of work in April ’20.

That, however, understates the true level of unemployment in the region. Partnership calculations based on TWC data suggests there are 50,000 to 85,000 fewer Houstonians in the workforce today compared with prior to the pandemic. They’ve dropped out for a variety of reasons: fear of catching COVID in the workplace, lack of day care for their children, generous unemployment benefits, early retirements, wanting time off to be with family, or needing time off for personal growth. If the dropouts were included in the calculations, Houston’s unemployment rate would likely exceed 9.0 percent.

The region’s outlook continues to improve, according to the latest Houston Purchasing Managers Index (PMI). The July ’21 PMI of 57.2 was up from 56.7 in June. Readings above 45 correlate with expansion of the service side of Houston’s economy, readings above 50 Houston’s goods producing sectors. July marked the 12th consecutive month with Houston’s PMI above 50. 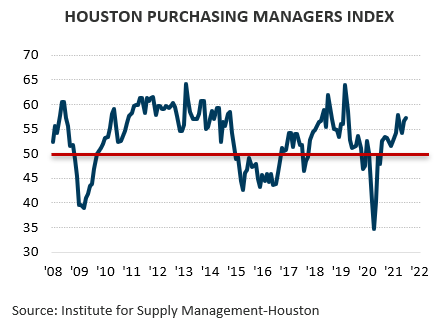 Over the past 16 months, movements in the PMI have tracked Houston’s response to the pandemic. In April ’20, the PMI fell to 34.6, the lowest reading on record. The index has pointed toward expansion since August ’20, though the strength of the expansion has fluctuated. Despite a recent surge in infection rates, vaccine rollouts have improved the near-term economic outlook. July’s PMI registers as the second highest reading of the past 24 months.

RAYS OF HOPE FOR OIL AND GAS

The spot price for West Texas Intermediate, the U.S. benchmark for light, sweet crude, has traded above $52 a barrel since the first week of January, the price at which most U.S. energy companies can profitably drill a well, according to the Federal Reserve Bank of Dallas. WTI has traded above $60 since mid-April. 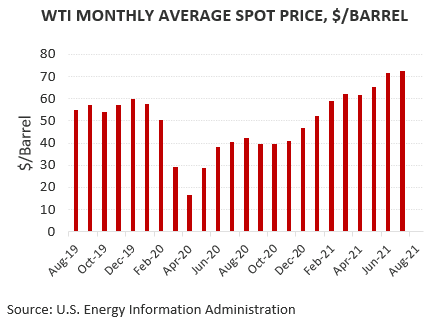 Higher prices haven’t driven a surge in exploration, though. The industry has added only 157 drilling rigs to the North American fleet this year. As of late August, the U.S. fleet remained 285 rigs below pre-pandemic levels and 575 below its December ’18 peak.

Several factors account for the weak rebound. Investors are reluctant to lend to the industry, forcing firms to fund their drilling programs from internal cash flow. Before the year started, many oil companies signed contracts to sell their production at $50 to $55 per barrel, hedging against potential losses if oil prices collapsed. They haven’t benefitted from the recent run up in prices. Shareholders are pressuring energy firms to invest in non-traditional energy ventures, limiting their opportunities to expand their drilling programs. And many firms had a large inventory of drilled but uncompleted wells, referred to as DUCs in the industry. They’ve focused on bringing those well online rather than drilling new ones. Since the first of the year, the inventory of DUCs has fallen by one-third and now approaches levels not seen since mid-’17.

This bodes well for service companies and equipment manufacturers. Exploration firms now need to drill more to maintain production. And manufacturers are seeing uptick in orders as equipment wears out and firms replace old gear with systems that are more efficient and environ-mentally friendly.

The Energy Information Administration (EIA) estimates U.S. production averaged 11.3 million barrels per day (b/d) in June. In its August Short-Term Energy Outlook, EIA forecast production to reach 11.4 million b/d in December ’21 and 12.2 in December ’22. EIA expects WTI to average $68.75 through the end of this year and $62.40 much or next year.

Houston’s construction industry continues to struggle. Dodge Data & Analytics reports new contracts for non-residential projects are off 33.8 percent compared to this time last year. Contracts for non-building projects, like roads, bridges, and water treatment plants, are up 26.0 percent, but that’s off a much smaller base and not enough to offset losses elsewhere. 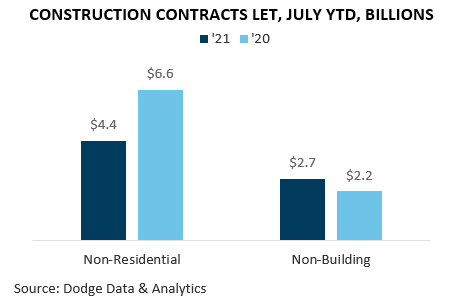 Reports from the various commercial brokerages show office construction slipped from last’s pace, which was at an already depressed level. Multi-family construction has slacked off, though it remains at an elevated pace. Same for industrial/warehouse projects. Retail construction has nudged down as well.

The slump in commercial construction began prior to the pandemic. Employment remains 35,900 jobs below its October ’19 peak. Since then, one in every six jobs in the sector has been lost.

Here are the facts to know about the Houston region this month
1
September Takeaway #1
Restaurants and bars have recouped 100 percent of their losses, retail 90 percent, other services (i.e., personal services), 80 percent.
2
September Takeaway #2
The sectors most impacted by social distancing early in the pandemic are now at or near full recovery. The region’s outlook continues to improve, according to the latest Houston Purchasing Managers Index (PMI). The July ’21 PMI of 57.2 was up from 56.7 in June. Readings above 45 correlate with expansion of the service side of Houston’s economy, readings above 50 Houston’s goods producing sectors. July marked the 12th consecutive month with Houston’s PMI above 50.
3
September Takeaway #3
Container traffic at the Port of Houston is on track to set a record this year. Through the first seven months of ’21, the port handled 1.9 million twenty-foot equivalent units (TEUs). If the current pace holds, the port will handle close to 3.3 million by January 1. The previous record was just over 3.0 million set in ’19.
Like this article? Share with your network