In this issue of Glance, the Partnership provides a summary of the 2022 employment forecast that was released earlier this month.
Share
December 2021 Economy at a Glance

The Partnership’s forecast calls for Metro Houston to create 75,500 jobs in ’22. Job growth will occur in every sector of the economy, including several that struggled to create jobs prior to the pandemic.

The greatest gains will occur in administrative support; government; health care and social assistance; professional, scientific, and technical services; and restaurants and bars. 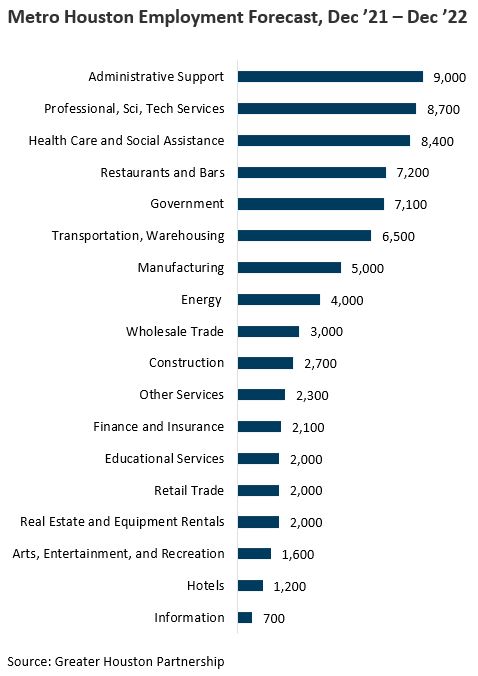 Adjusted for inflation, gross domestic product (GDP) should grow 3.6 percent in ’22, according to economists surveyed by The Wall Street Journal in October. The Organisation for Economic Co-operation and Development (OECD) forecasts U.S. growth at 3.9 percent. The Federal Reserve Bank of Philadelphia’s Survey of Professional Forecasters pegs GDP growth at 4.4 percent.

As of November ’21, the nation had recovered roughly 80 percent of the 22.1 million jobs lost in the early stages of the pandemic. Prior to the pandemic, the U.S. averaged 200,000 new jobs per month. The consensus of the 47 professional forecasters surveyed in September by the National Association for Business Economics (NABE) is for the U.S. to average 321,000 new jobs per month in ’22. According to The Wall Street Journal’s survey, the U.S. should add 350,000 jobs per month in ’22. The Survey of Professional Forecasters calls for 456,300 jobs per month. At even the lower range of forecasts, the U.S. should recoup all its pandemic losses by late ’22 or early ’23.

The resurgence of economic activity in the first half of ‘21 lifted global trade above its pre-pandemic peak, according to the World Trade Organization. The WTO predicts global merchandise trade growth of 10.8 percent in ’21—up from 8.0 percent forecasted in March—followed by a 4.7 percent rise in ’22. That’s up from 4.1 percent in an earlier forecast.

Here are the facts to know about the Houston region this month
1
December Takeaway #1
The Partnership’s forecast calls for Metro Houston to create 75,500 jobs in ’22.
2
December Takeaway #2
Adjusted for inflation, gross domestic product (GDP) should grow 3.6 percent in ’22.
3
December Takeaway #3
As of October ’21, Metro Houston had recouped 269,000 jobs, or roughly 75 percent of the 361,400 jobs lost in the early stages of the pandemic.
Like this article? Share with your network