In this edition, we explore Omicron, GDP, and employment.
Share
January 2022 Economy at a Glance

The Federal Reserve released minutes of its December meeting signaling interested rates would soon rise which added to the market turmoil. The Bureau of Labor Statistics (BLS) reported the U.S. created 199,000 jobs in December. Economists had expected over 400,000. The report sent markets tumbling even further.

Despite the inauspicious start, the U.S. should enjoy solid growth this year. The Omicron wave will subside. Labor markets will remain tight. Interest rates will rise but remain low by historic norms. And consumer confidence remains high. As the nation goes, so goes Houston. The region should enjoy strong growth in ’22 as well.

In the first week of January, the U.S. averaged 650,000 new infections per day. The previous peak (second week of January ’21) new infections averaged 250,000 per day. More than 130,000 patients were hospitalized as this year started compared to 123,000 during the January ’21 peak.  Deaths, a lagging indicator of virus activity, have yet to increase. The U.S. is averaging 1,540 deaths per day, well below the 3,390 during January of last year. Omicron, while more easily spread, appears to be less virulent. 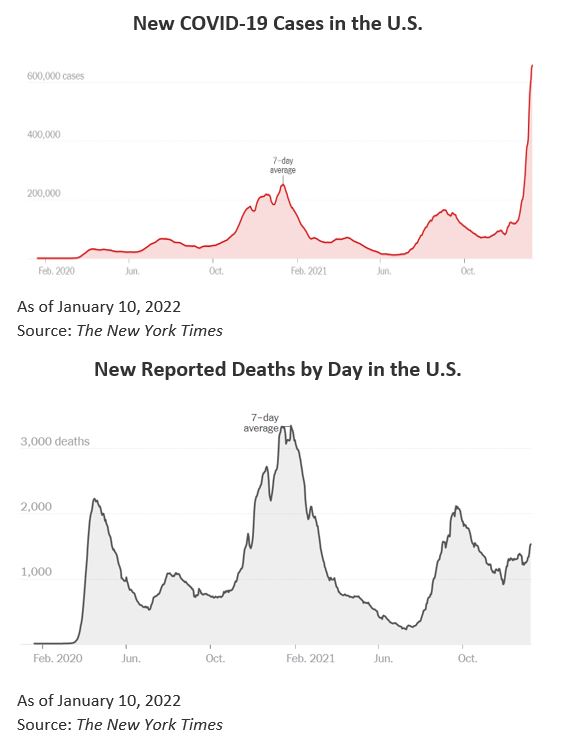 The surge has led to inevitable restaurant closures, flight cancellations, school shutdowns, and delays in employees returning to the office. Seventy percent of Americans responding to a December Morning Consult survey indicated they were “very” or “somewhat concerned” about Omicron. But those concerns haven’t severely disrupted the economy as past surges have.

Despite the surge (and the horrible weather), the U.S. Transportation Security Administration (TSA) handled 78.8 percent more passengers in the first seven days of this year than during the comparable period in ’21.
And according to Placer.ai, a firm which specializes in location analytics, foot traffic at retail outlets in Harris County was up 2.5 percent in early January this year compared to early December of ’21.

The coronavirus is now part of everyday life. Vaccinations, social distancing, and masks have helped to minimize the risk of exposure. Consumers are less likely to dramatically change their behavior with each new strain of the virus.

Mental fatigue also plays a role in how consumers are responding to Omicron. A December Monmouth University poll found that most Americans (60 percent) say they feel “worn out” by how Covid has impacted their daily lives. Consumers are ready for their lives to return to normal, whatever normal may be these days.

Business Impact of the Surge

The Omicron surge is unlikely to lead to massive layoffs. The labor market is already quite tight. According to the Job Openings and Labor Turnover Survey (JOLTS) compiled by BLS, employers had 10.6 million open positions in November. In the five-years prior to the pandemic, job openings averaged 6.4 million per month. The current level of openings is also significantly higher than the U.S. experienced as it emerged from the Great Recession. 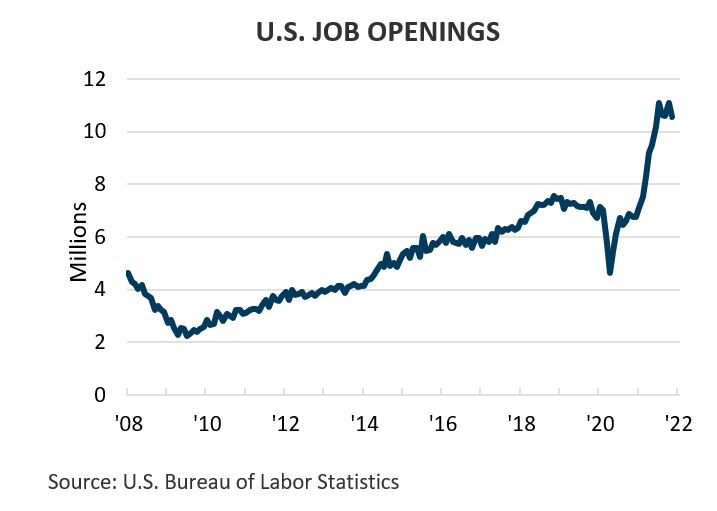 Employers realize that if they let workers go during the Omicron surge, they’ll have difficulty hiring new workers when it subsides.  In a December survey by the National Federation of Independent Businesses (NFIB), 49 percent of respondents indicated they already had job openings they couldn’t fill.

Despite a rapid increase in cases, consumer confidence fell only moderately in December. Morning Consult’s Index of Consumer Sentiment has fallen 0.9 percent since the onset of the Omicron surge, significantly below the 7.0 percent drop experienced during the Delta surge.

Omicron’s impact is slowly showing up in national survey data.  In December, the Services Purchasing Managers Index (PMI) registered 62.0, down from 69.1 in November. The Manufacturing PMI registered 58.7, down 61.1 the month prior. Readings above 50 indicate growth in that sector, below 50 contractions. December marked the 19th consecutive month both PMIs logged above 50. Though they’ve both slipped, both remain at levels that signal strong overall growth.

Here are the facts to know about the Houston region this month
1
January Takeaway #1
In the first week of January, the U.S. averaged 650,000 new infections per day. The previous peak (second week of January ’21) new infections averaged 250,000 per day.
2
January Takeaway #2
Houston’s overall economy shrank 3.0 percent in ’20, according to the U.S. Bureau of Economic Analysis (BEA). That reflects a $14.0 billion loss in economic activity, adjusting for inflation.
3
January Takeaway #3
Metro Houston added 33,100 jobs in November, according to the Texas Workforce Commission (TWC). That ranks as the best November for job growth in the past 30 years.
Like this article? Share with your network