This issue of Glance provides insights into the local impact Russia's invasion of Ukraine may have on Houston along with an update to local employment data for 2021.
Share
March 2022 Economy at a Glance

Local Impact of a Global Event

Russia’s invasion of Ukraine will impact Houston’s economy, though how much remains uncertain.

Crude prices will rise. Inflation will accelerate. Consumers will cut back on spending. The U.S. Federal Reserve will raise interest rates to combat inflation. Higher rates will reduce business investment. And the barrage of bad news from Ukraine will weigh on consumers’ psyches.

Growth will slow, but a local recession is unlikely. The region is coming off its best year on record for job growth. Corporations continue to relocate or expand operations here. Population growth remains strong. The U.S. economy continues to expand. And while Houston has commercial connections to Russia and Ukraine, those ties represent a fraction of Houston’s international business. The conflict may slow growth, but it’s unlikely to drag the Houston into recession. That said, one should be aware of the risks the conflict poses for the local economy.

Recessions in Russia and Ukraine are certain. Moody’s forecasts the Russian economy will shrink 15 percent or more this year, Ukraine’s by as much as 30 percent. Houston’s exposure to the Russian and Ukrainian economies is small, however. Combined, the two account for only 3.3 percent ($3.0 billion) of total Houston imports and 0.6 percent ($684 million) of the region’s imports. 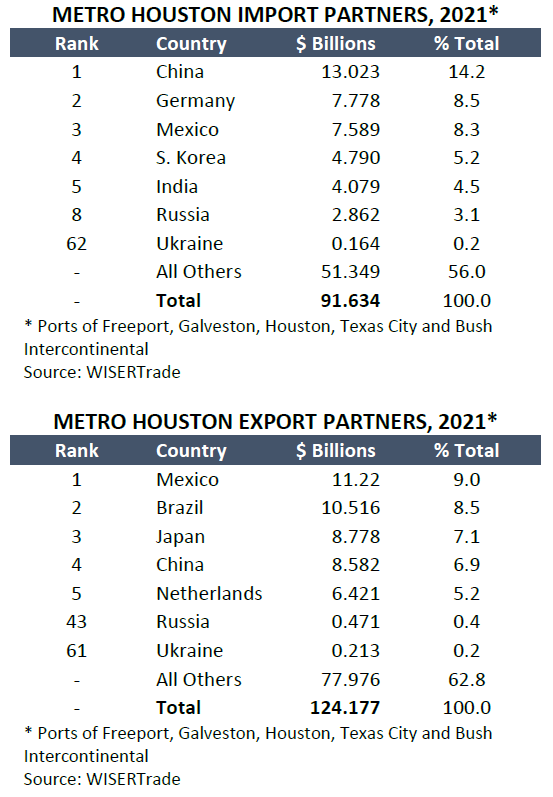 On March 8, U.S. President Joe Biden banned the import of crude and refined products from Russia. British Prime Minister Boris Johnson quickly announced the U.K. would follow suit. Several members of the European Union (EU) have signaled they would curtail Russian crude imports by the end of the year as well.

In Houston, the direct impact of the embargo will be felt at two refineries that import crude from Russia, ExxonMobil in Baytown and Valero in Texas City. The indirect impact will be felt by all Houstonians as higher prices at the pump.

Financial markets had anticipated the embargo and other supply constraints, pushing up prices in the days before Biden’s announcement. Between February 24 (the day Russia invaded Ukraine) and March 8 (the day Biden announced the boycott), the spot price for West Texas Intermediate (WTI) jumped $23 per barrel, a 25.6 percent increase in ten days. Since then, prices have slipped but remain well above where they stood prior to the invasion. 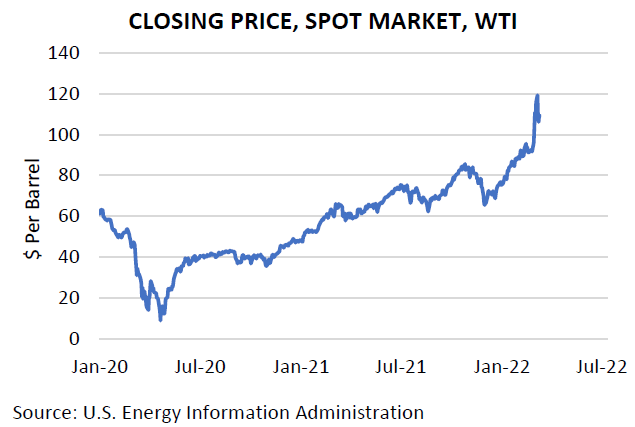 The surge in energy prices won’t lead to hiring or drilling booms, at least not initially. Over the years, U.S. exploration firms have learned how to produce more oil with fewer employees. In Houston, upstream employment has fallen 34.2 percent (102,000 jobs) since December ’14 while domestic crude production has jumped 21.0 percent (2.0 million barrels per day) over the same period. There’s also a significant lag, as much as six to nine months, from when a company decides to ramp up drilling and when additional production comes online. Added to that, drillers were struggling to find crews to operate their rigs prior to the run-up in oil prices.

Higher prices will lead to higher profits in the near term, but the war and its sanctions will weigh on major oil producers for years. BP, Equinor, Exxon and Shell have all decided to halt all long-running operations in Russia. These four divestures alone will result in write-downs exceeding $33.2 billion. And Houstonians who manage these projects, provide translation services, and otherwise facilitate business with Russia may lose their jobs as well.

The reopening of the global economy that began in ’21 had already caused a run up in prices at the pump. From January ’21 to January ’22, the average price for a gallon of regular gasoline on the Texas Gulf Coast rose from $1.95 to $2.95 a gallon.

Those higher prices have cut into household budgets. The typical family of four (two parents, two children, two vehicles) consumes about 1,000 gallons of gasoline a year. The dollar-a-gallon increase translates into consumers needing $1,000 more to meet their basic transportation needs this year compared to last. Since January, the price of a gallon of regular has jumped another 88 cents a gallon. Now families will need to budget nearly $2,000 more for fuel purchases this year than they did at the start of ’21. 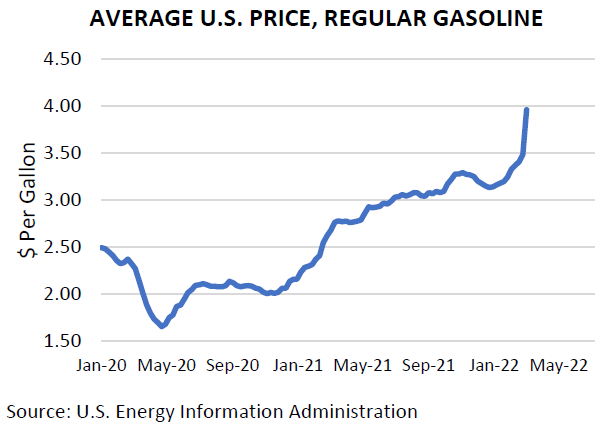 Diesel prices have followed a similar trajectory and are up 84 percent since January ’21. Over 70 percent of the nation’s freight is moved by trucks; the increase in diesel prices will be passed along to consumers.

How high will fuel prices go? Moody’s estimates that every $10 increase in the price of crude results in 30 cents in-crease at the pump. How high will crude prices go? Goldman Sachs forecasts crude prices to hit $135 per barrel this year. Barclays and Rystad Energy warn prices could hit $200. The futures market, however, has a different out-look. On March 14, the day this newsletter was published, WTI futures traded on the NYMEX never topped $100 per barrel through the end of the year. The one exception being crude for delivery in April trading at $101.86 per barrel.

In the 12 months ending February ’22, inflation accelerated to 7.9 percent. The largest increases occurred in the cost of fuel, food, and shelter. These are non-discretionary items, i.e., spending necessary for daily existence. When the costs of essential items rises faster than wages, consumers pull back on discretionary spending, i.e., lifestyle purchases. If inflation remains elevated, consumers will cut back on entertainment, travel, and dining out. Houston’s leisure and hospitality sector would feel the brunt of this shift.

The day President Biden announced the U.S. would stop importing crude from Russia, Bloomberg modeled the impact higher crude prices might have on inflation. At $140 per barrel, inflation topped 9 percent. At $160, it hits 9.5 percent. At $180, it topped 10 percent. However, as noted earlier, crude is not expected to reach those heights.

Russia is the world’s largest supplier of wheat. Together with Ukraine, it accounts for 25 percent of global exports. Russia also ships significant amounts of soybeans, corn, barley, and other grains in addition to potash, potassium, and fertilizer. The U.S. is also a major wheat and grain exporter, so American farmers may benefit from the Russian sanctions, but at the expense of American consumers who will be paying more at the grocery store. And American farmers will likely be paying more for fertilizers, the cost of which will be passed along to consumers.

Russia is also a major exporter of aluminum, copper, cobalt, and nickel, and is the world’s largest exporter of palladium, with over 20 percent of the global market. Palladium is used in catalytic converters. The automotive supply chain, already struggling from global computer chip shortages, could see more shortages and cost increases.

Here are the facts to know about the Houston region this month
1
March Takeaway #1
While Houston has commercial connections to Russia and Ukraine, those ties represent a fraction of Houston’s international business. The conflict may slow growth, but it’s unlikely to drag the Houston into recession.
2
March Takeaway #2
In the 12 months ending February ’22, inflation accelerated to 7.9 percent. The traditional cure for inflation is higher interest rates. The U.S. Federal Reserve will begin raising rates later this month.
3
March Takeaway #3
Benchmark revisions to employment data released in early March paint a clearer picture of job losses early in the pandemic. Prior to the revisions, it was thought Houston lost 361,400 jobs in March and April of ’20. The losses have been revised downwards to 359,400.
Like this article? Share with your network