This issue of Glance provides insights into population growth and employment data.
Share
April 2022 Economy at a Glance

In spite of the pandemic, metro Houston’s population grew in the 12 months ending July 1, 2021.

The region added just over 69,000 residents, enough for Houston to reach a new milestone. The nine-county metro area topped 7.2 million residents and now exceeds that of 37 states and the District of Columbia.

Just over half of the region’s growth (54.8 percent) came from the net natural increase (i.e., the difference between births and deaths). Houston has traditionally fared well in this area, and although deaths increased and births decreased during the pandemic, Houston experienced a significant natural increase. Only metro New York reported a larger natural increase than Houston. 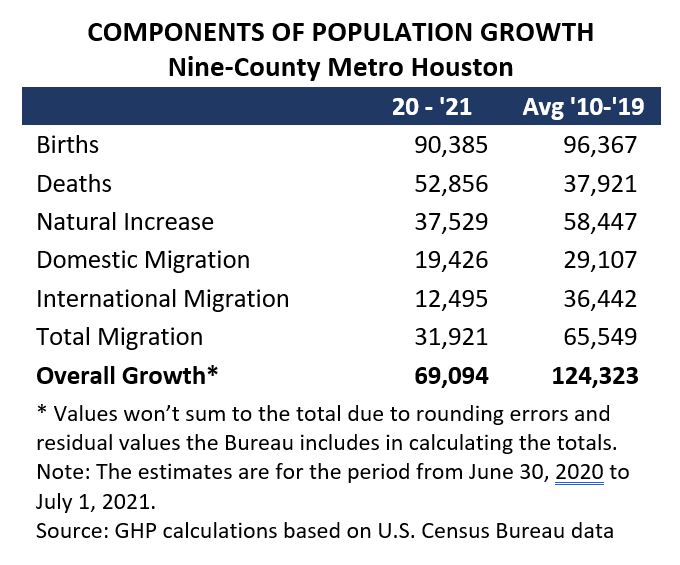 Over the past 10 years (’11 to ’21), Houston has added more than 1,150,600 residents. The region’s population growth was more rapid earlier in the decade during the fracking boom, nearly stalled during the fracking bust, but began to pick up steam in recent years. The region has maintained a trend established in the ’90s of adding 900,000 or more residents each decade. 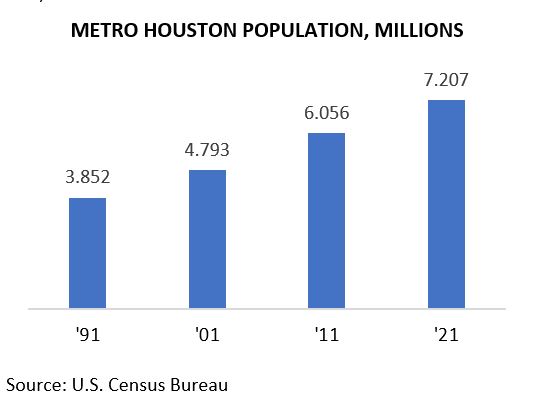 But population growth has shifted over time, with the outlying counties receiving the bulk of the new residents. This has resulted in Harris County accounting for an ever shrinking share of the region’s population.

Houston created 45,500 jobs in February, according to data released by the Texas Workforce Commission (TWC). That ranks as the best February on record for job growth.

Prior to the pandemic, February gains typically averaged 18,600 jobs for the month, suggesting the recent gains are well above the longterm trend. The unusually robust gains may reflect difficuties the TWC is having collecting the data and growth may not be as robust.  As a result, gains in most sectors should be viewed with caution. That said, this is what the data suggest.

The month’s outstanding performance brings the region closer to its pre-pandemic employment peak. The gap currently stands at 16,700 jobs. March is typically a strong month for the region, in boom years adding 20,000 or more jobs, in normal years adding 10,000 to 15,000. If the region follows historic patterns, metro Houston may return to pre-COVID employment levels when the March data is released (April 15) and certainly by the April report (scheduled for release May 20). 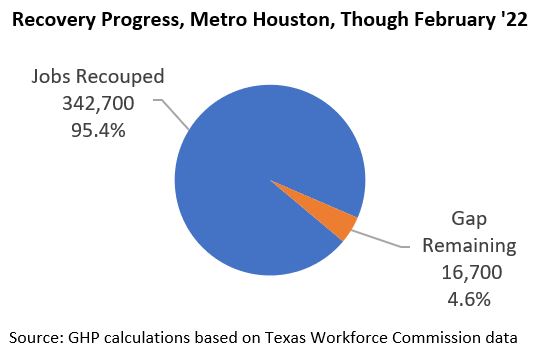 Only two sectors showed significant losses, general merchandise stores (-1,000 jobs) and clothing and accessory stores (-800). Those layoffs reflect lingering aftereffects of the end of the holiday shopping season. The losses were more than offset by gains elsewhere in retail, the sector overall adding 2,000 jobs in February. Clearly, retail has recovered. While consumers may like the convenience of shopping on-line from a couch, sometimes they need a little retail therapy and welcome the chance to touch and see what they’re buying.

Here are the facts to know about the Houston region this month
1
April Takeaway #1
In the 12 months ending July '21, the Houston region added just over 69,000 residents.
2
April Takeaway #2
The nine-county metro area topped 7.2 million residents and now exceeds that of 37 states and the District of Columbia.
3
April Takeaway #3
Houston created 45,500 jobs in February, according to data released by the Texas Workforce Commission (TWC). That ranks as the best February on record for job growth.
Like this article? Share with your network