This issue of Glance provides insights into the economic recovery, rising costs and labor force.
Share
May 2022 Economy at a Glance

Prospects for the global economy have darkened since the outbreak of war in Ukraine prompting economists to reassess their forecasts.

•    The International Monetary Fund (IMF) projects global growth to slow from an estimated 6.1 percent in ’21 to 3.6 percent in ‘22. This is 0.8 percentage point lower for ’22 than projected in January.
•    The World Trade Organization (WTO) expects merchandise trade to grow 3.0 percent this year, down from its previous forecast of 4.7 percent.
•    The Organisation for Economic Cooperation and De-velop¬ment (OECD) predicts inflation, already elevated at the start of the year, could be 2.5 percentage points higher, on average, across the globe.
•    The World Bank (WB) warns that food and energy price shocks from the Ukraine war could last for years.

Slower global growth will impact Houston’s economy. But will it lead to a local recession? The Partnership doesn’t think so. The reasons why will be outlined at the organization’s Global Houston luncheon, a comprehensive look at the region’s ties to the global economy. The event, to be held Friday, May 20, at the Omni Hotel, will feature Philipp Carlsson-Szlezak, chief economist for BCG. He will deliver the keynote address on the global outlook. Patrick Jankowski, the Partnership’s Senior Vice President of Research, will discuss how global trends will impact Houston. All attendees will receive a copy of Global Houston 2022, the Partnership’s analysis of international activity in the region as well as profiles of Houston’s top trading partners. To register for the event, visit the Partnership’s website.

Inching Closer to a Full Recovery 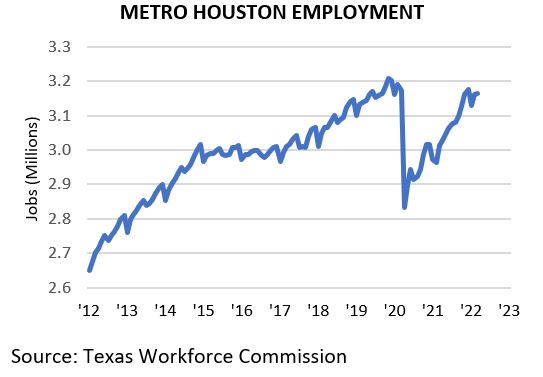 If TWC revises its initial estimates for March, Houston may return to pre-COVID employment even sooner. That revision could come with April jobs report. TWC reported a gain of only 1,700 jobs in March. Typically, the region adds 10,000 to 20,000 jobs in the month.  Other indicators—population growth, exports, home construction, sales tax collections, the Houston Purchasing Managers Index—indicate the region is currently enjoying robust economic growth which suggests stronger job growth.

Revisions to the jobs reports are common. TWC bases its monthly estimates on employer surveys. Like all surveys, TWC’s survey is subject to sampling errors, incomplete responses, late responses and other problems. The commission tries to account for these discrepancies in the initial estimates, and issues revised estimates as additional survey data becomes available.

Unlike employment data, local labor force data is seldom subject to revisions. It shows Houston’s unemployment rate fell from 5.3 percent in February to 4.4 percent in March. Unemployment peaked at 14.0 percent early in the pandemic. These rates are not seasonally adjusted.

Compensation costs for private-sector workers in metro Houston rose 4.5 percent in the 12 months ending March ’22, according to the U.S. Bureau of Labor Statistics (BLS). That’s the highest bump in recent years. A year ago, compensation costs jumped a mere 1.1 percent. Compensation includes wages, salaries, health insurance and other benefits. Separately, wages and salaries, the largest component of compensation, rose 5.2 percent, slightly above the national average of  4.8 percent. 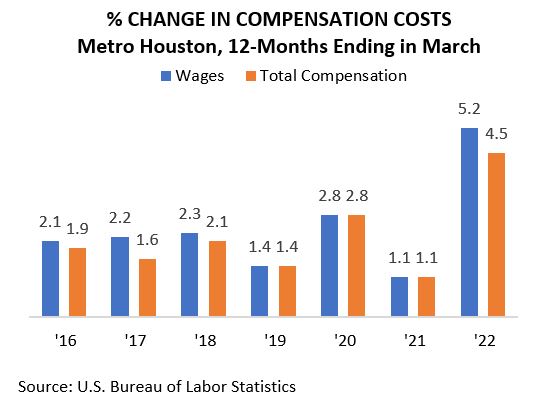 Housing affordability in Houston has declined significantly over the past two years, according to a study recently released by the Houston Association of Realtors (HAR). Only 47 percent of households in metro Houston earned the minimum annual income ($73,400) required to purchase the median-priced Houston home ($330,800) in Q1/22. That’s down from 58 percent in Q1/21. Houston is not unique.

All the state’s major metro areas saw similar declines over the past year. Metro Austin has suffered the worst drop. 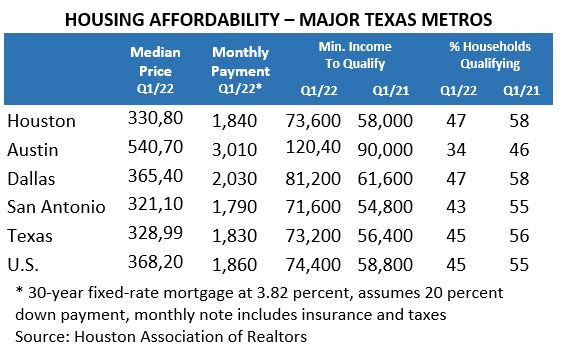 This is not a recent phenomenon. The Texas metros that HAR studied have seen steady declines in affordability over the past 10 years. In Q1/12, 70 percent of Houston households qualified for the median-priced home, compared to 47 percent today. For Austin, the share fell from 64 to 34 percent, in Dallas 72 to 47 percent, and San Antonio, 66 percent to 34 percent. 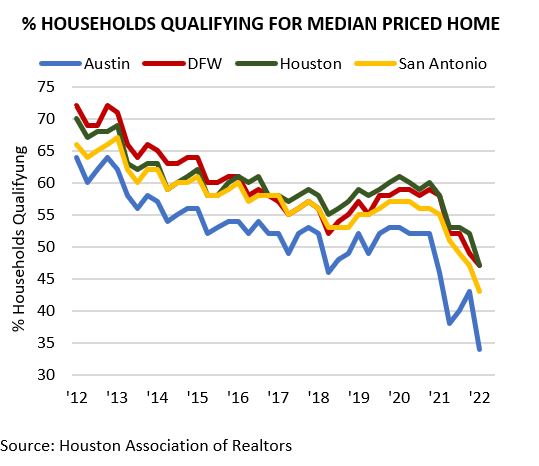 Home prices and interest rates are rising faster than wages, so even fewer families may be able to afford to purchase a home in the future. Prices are expected to appreciate at a double-digit rate this year. And as of mid-May, the average 30-year fixed-rate mortgage was 5.3 percent, 1.5 points higher than the rate in HAR’s study. Rates will likely rise another one to two percentage points by the end of this year.

Here are the facts to know about the Houston region this month
1
May Takeaway #1
As of March ’22, Houston had recouped 331,400 jobs or 92.2 percent of the 359,400 jobs lost in the early stages of the pandemic.
2
May Takeaway #2
Compensation costs for private-sector workers in metro Houston rose 4.5 percent in the 12 months ending March ’22, according to the U.S. Bureau of Labor Statistics (BLS).
3
May Takeaway #3
Initial claims for unemployment benefits in metro Houston have fallen below pre-pandemic levels.
Like this article? Share with your network