This issue of Glance examines the region’s economic performance through mid-year, with special attention paid to employment, energy, real estate and transportation.
Share
August 2022 Economy at a Glance

Only a few sectors struggled. Rising interest rates and soaring prices cut into home sales. Double-digit inflation weighed on consumer spending. The apartment market began to soften. And little progress was made in reducing the glut of office space.

Even so, the positives greatly outweighed the negatives. Houston enters the second half of ’22 with considerable momentum. The region should grow through the end of this year and well into next. What follows is the Partnership’s assessment of the economy at mid-year.

Metro Houston created 84,600 jobs in the first half of ’22. That’s the best start on record for the region, better than any year in the ’80s, when the domestic rig count topped 4,500, or the early ’10s, when the Eagle Ford Shale boom lead Houston out of the Great Recession.

In the aggregate, Houston has recovered all the jobs lost in the pandemic. Nonfarm payroll employment topped 3.2 million in June ’22. That’s 75,500 above the previous employment record set in November ’19. 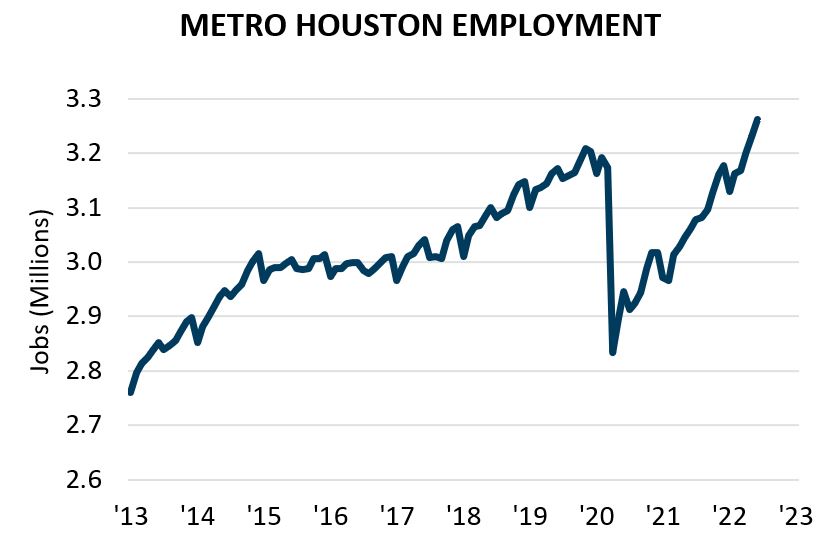 At their current pace of growth, a handful of sectors should recover their remaining losses within the next month or so (jobs needed in parenthesis): real estate and equipment rentals (200); information (700); hotels (2,300); other services (3,400); and construction (5,700).

Only two sectors still struggle: manufacturing (9,100 jobs) and energy (9,400 jobs). The bulk of the manufacturing jobs still to be recouped are in oil field equipment manufacturing. They won’t return without a significant increase in drilling activity. As of mid-August, the U.S. rig count had yet to return to its pre-pandemic level.

Though energy companies reported record profits in Q2/22, they are reluctant to significantly expand their payrolls. Instead, they are repurchasing shares, paying dividends, funding alternative energy efforts, and marginally increasing exploration programs.

Metro Houston added over 60,000 workers to its labor force in the first half of this year and nearly 100,000 over the past 12 months. Houstonians who dropped out during the pandemic have re-entered the job market. The economy has also benefitted from the surge in new residents to the region. In June ’22, the workforce hit 3,521,124, an all-time high for the region.

Workforce estimates come from the Current Population Survey (CPS), which is based on a survey of households. Payroll data comes from the Current Employment Series (CES), which is based on a survey of employers. The two surveys tend to align on the direction of job growth but often disagree on the magnitude. Data from the most recent CPS suggest Houston has added only 56,680 jobs so far this year, well below CES estimates and the second best start to the year on record. The best start according to the CPS was ’10 when the region created over 96,000 jobs.

Initial claims for unemployment benefits, a proxy for layoffs in the region, trended down through late spring then inched up starting in April. They remain well below pandemic peaks, however, and are only marginally above pre-pandemic levels. 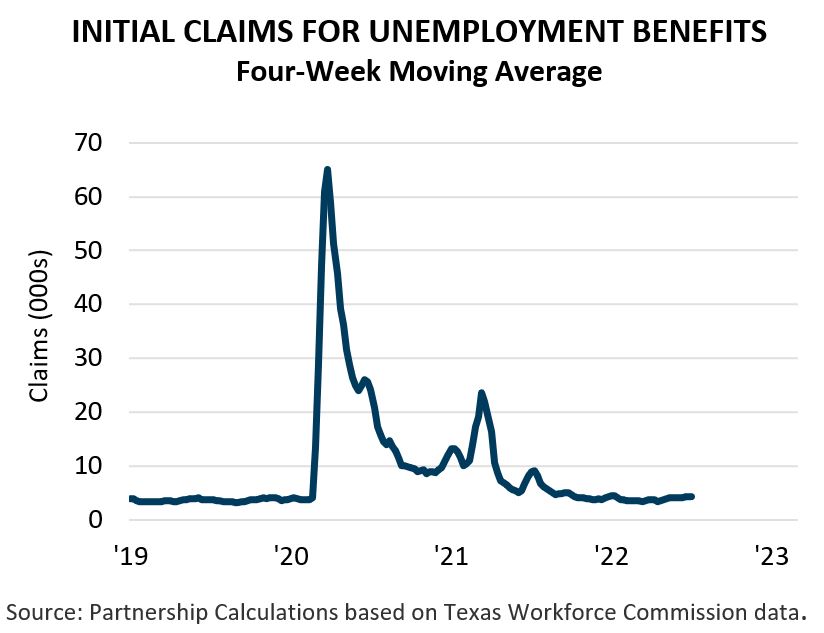 Most of the recent layoff announcements have been at the national level, not a response to a local slowdown. Layoffs are concentrated in the tech sector and the digital currency trading platforms, not a slowdown in the national economy. Almost none of the layoffs impact Houston.

There were 22,122 continued claims for unemployment benefits filed in the Gulf Coast Region the second week of June. That’s up from 20,221 in May but an improvement over the 43,092 filed in June of last year. The drop suggests those who have lost jobs had little difficulty finding new ones. Continued claims peaked at 276,116 in June ’20.

Here are the facts to know about the Houston region this month
1
August Takeaway #1
The first half of ’22 was the strongest opening on record for Hou­ston’s economy.
2
August Takeaway #2
The Houston Purchasing Mangers Index has held above 50 for 24 consecutive months. Any reading above 50 indicates an expanding economy.
3
August Takeaway #3
The U.S. Energy Information Administration forecasts crude to trade above $90 per barrel through the end of the year, well above the $60 most producers need to profitably drill a new well.
Like this article? Share with your network