This edition of Glance delves into Metro Houston's job growth and an overview of trends in the apartment market.
Share
November 2022 Economy at a Glance

Metro Houston has created 108,600 jobs through the first nine months of ’22. That already makes this the fifth-best year on record for job growth. 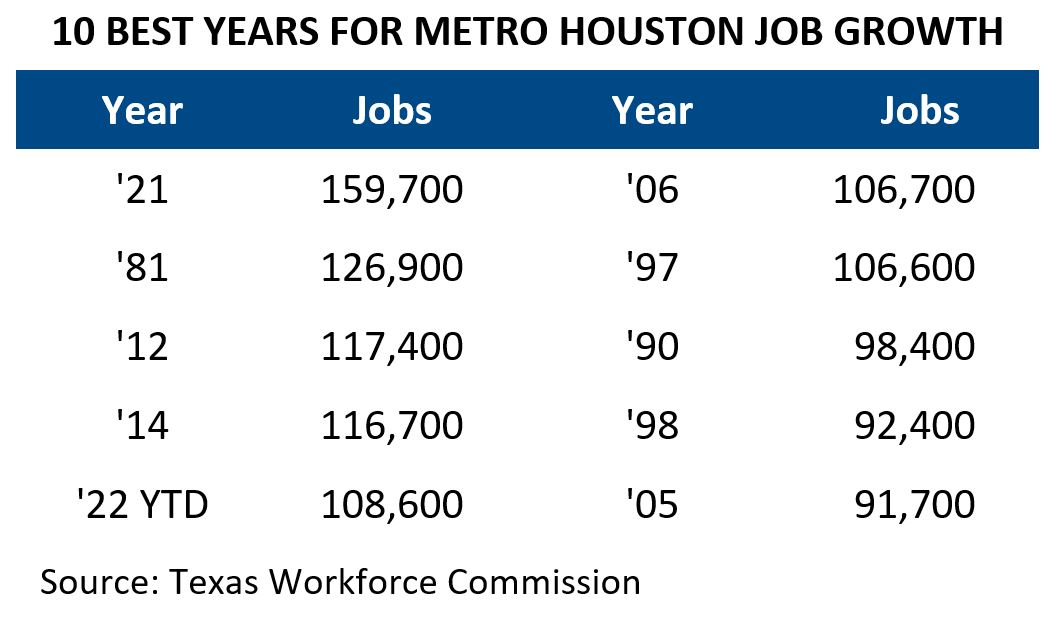 Those numbers are deceiving, however. The government sector, specifically state and local education, added 16,800 jobs in September. Several other sectors—restaurants and bars, and business, scientific and technical services—showed uncharacteristically large increases as well. Those gains helped offset significant losses in other sectors.

Restaurants and bars added 5,300 jobs in September, a month in which the sector typically loses 1,000 to 2,000. Over the last two months, restaurants and bars have hired 8,700 workers. That’s nearly a full year’s worth of job growth. At the pace of the last few months, the sector is on track to add over 33,000 jobs this year, or three times what’s typical for a year. The Partnership suspects TWC is overestimating job growth and will eventually revise these gains downward.

Professional, scientific, and technical services added 3,900 jobs in September. The sector typically sheds a few hundred jobs in the month. Only three times in the past 30 years has the sector recorded growth in September, and then no more than 500 to 600 jobs. The Partnership suspects TWC is overestimating here as well and will later revise the gains downward.

Sectors recording notable losses in September were construction (-3,000 jobs), retail (-2,800), wholesale trade (-2,200), transportation and warehousing (-2,200), other services (-2,100), and nondurables manufacturing (-1,200). It’s too soon to tell whether the losses reflect slower growth or whether TWC is compensating for overestimating gains earlier in the year by subtracting jobs later in the year.

Historically, the region adds 20,000 or more jobs in Q4, even in recession years. The gains often top 40,000 in boom years. Businesses typically boost hiring to handle the holiday rush and meet year-end deadlines. Even with a weak finish to the year, Houston should end ’22 with a net gain of 130,000 or more jobs.

However, these gains could be revised downward when TWC issues its benchmark revisions in March ’23. The data TWC releases each month derives from a survey of employers, the sample selected to represent employers from all sizes and industries in the economy. Like all surveys, the results are subject to sampling, response, and processing errors. In some years, TWC has underestimated growth by as many as 45,000 jobs. In other years, TWC has overestimated by as many as 33,000. The Partnership suspects TWC may have overestimated job growth in April, May, and June of this year, reporting the region created 30,000 or more jobs each month, well above the long-range average and the previous records for those months.

If growth is later revised downward by 20,000 or more jobs, ’22 will still prove to be remarkable. In a normal year, one in which high oil prices aren’t over-stimulating growth or low prices haven’t sedated it, the region creates 60,000 to 70,000 jobs.  Even after the March ’23 revisions, the Partnership expects job growth to finish well above “normal.”

Thirteen of the 18 major sectors tracked by TWC had fully recouped their pandemic losses as of September ’22. 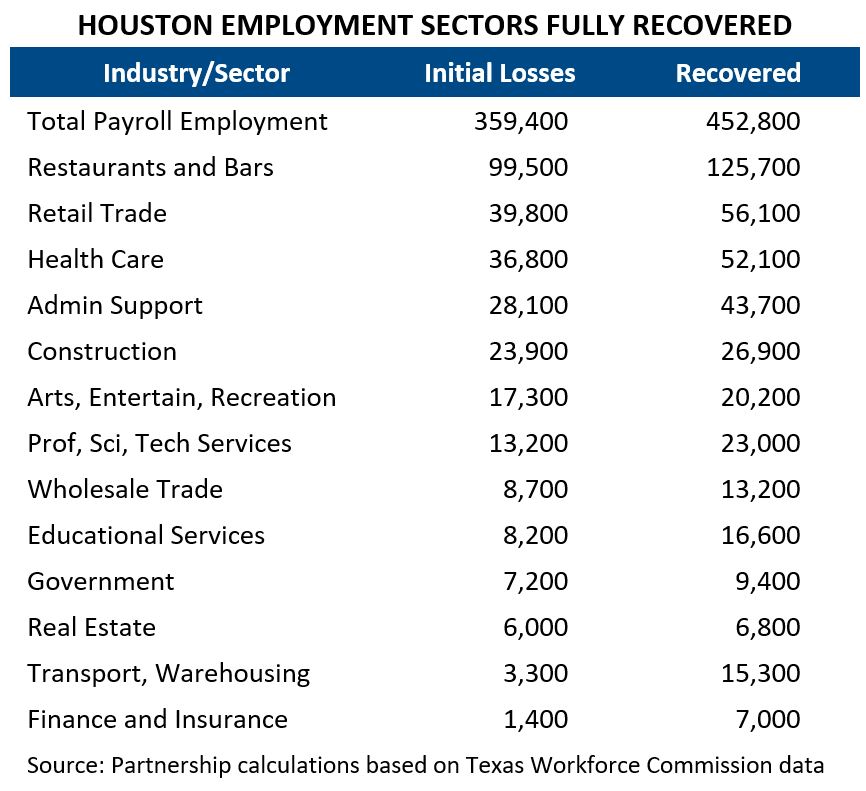 As of September ’22, five sectors have yet to fully recover their pandemic job losses.

Leisure travel has recovered, and event bookings have soared, but business travel has yet to return to pre-pandemic levels and that’s delayed the recovery of Houston’s hotel sector.

Other Services includes barber shops, beauty salons, repair shops, and similar small businesses. These were among the hardest hit businesses during the pandemic. They are also among some of the most difficult to survey. The Partnership suspects recovery is much further along than TWC has reported.

The downturn in energy began prior to the pandemic when Wall Street curtailed lending to the sector. The pandemic compounded the sector’s woes. Now it deals with labor and materials shortages, a hostile regulatory climate, and pressure to adjust business models brought on by the need to address climate change.

Manufacturing’s woes are tied to energy. Almost all the missing jobs involve the manufacture of equipment used for the exploration and production of oil and gas.

The information sector is dealing with structural changes in how we send and receive information that began two decades ago and were compounded by the pandemic.

Houston’s recovery compares well against that of the nation and major U.S metro areas. As of September, Houston ranked sixth among the nation’s 20 most populous metros in percent of jobs recovered. 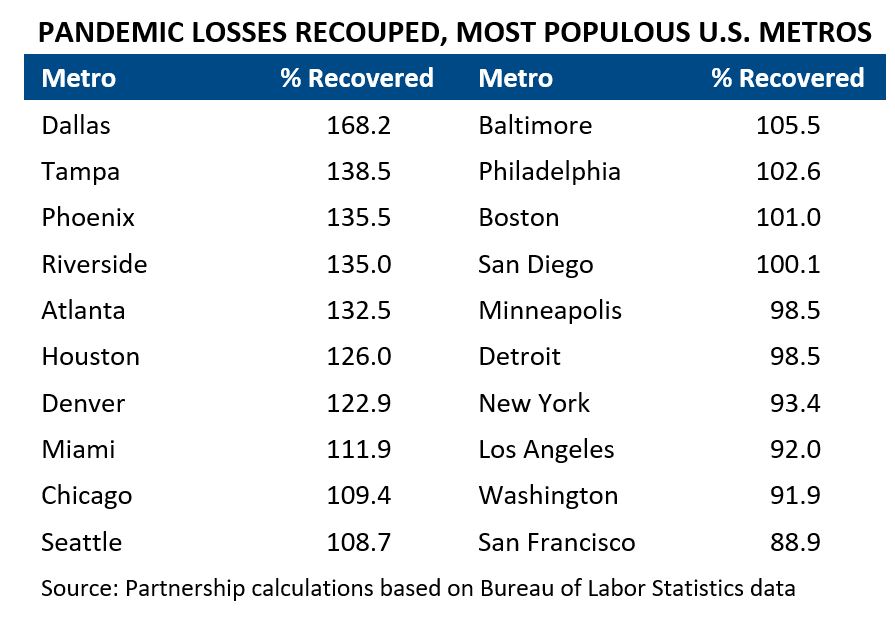 Here are the facts to know about the Houston region this month
1
November Takeaway #1
Metro Houston has created 108,600 jobs through the first 9 months of '22.
2
November Takeaway #2
Houston ranks 6th among the nation's 20 most populous metros in percent of jobs recovered.
3
November Takeaway #3
Class A apartments’ strong absorption rates offset declines in seen across classes B, C, and D.
Like this article? Share with your network