This edition of Glance reviews the current state of the U.S. economy, how Houston’s most recent GDP estimates compare to that of other metros, and provides an update on local employment and metro exports.
Share
January 2023 Economy at a Glance

The U.S. economy continues to grow despite rising interest rates, a plunge in new home construction, the ongoing war in Ukraine, concerns over a new COVID variant, and a looming recession in Europe. The long-anticipated recession has yet to arrive.

U.S. gross domestic product, the most comprehensive gauge of the nation’s economic health, grew 3.2 percent in Q3/22 adjusted for inflation. That’s up from a decline of 0.6 percent in Q2/22 and a drop of 1.6 percent in Q1/22. 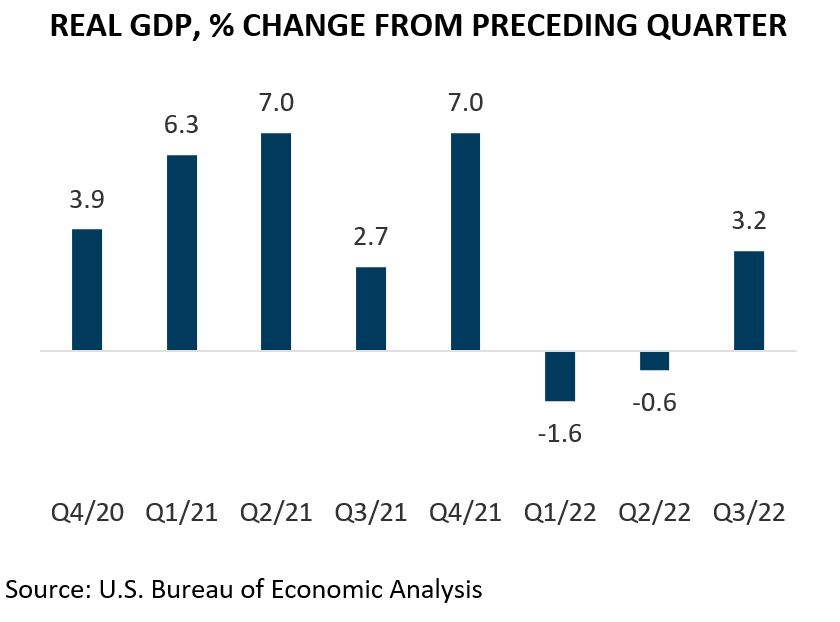 The 3.2 growth rate reflects an upward revision from two previous estimates issued by BEA. Initially, the agency estimated U.S. GDP grew 2.6 percent in Q3, later revised that to 2.9 percent, then revised that to 3.2 percent.

Growth was driven by rising exports, an increase in consumer spending, an uptick in commercial real estate, equipment, and intellectual property investments, and higher state, local, and federal government spending. These were somewhat offset by drops in home construction and inventory purchases.

The nation created 223,000 jobs in December, which brought overall growth for ’22 to 4.5 million jobs. That ranks as the fifth-best December and the second-best year on record for job creation in the past two decades. 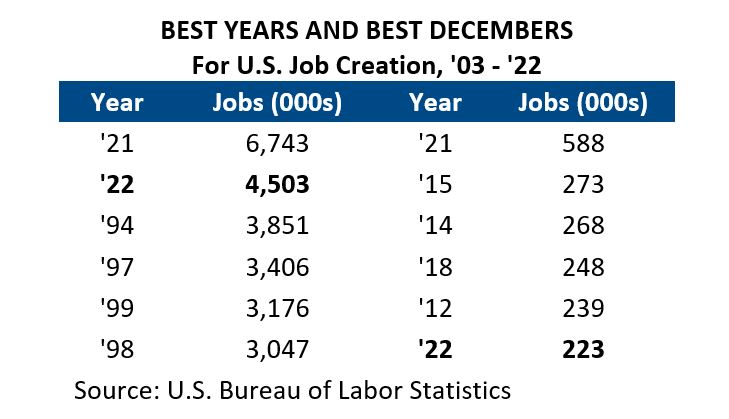 Nationally, initial claims for unemployment benefits, a proxy for lay¬offs, continue to trend lower. The four-week average slipped to 213,750 the last week of December, down from 249,500 in early August, the most recent peak.

The four-week average for continued claims rose to 1,687,500, from a trough of 1,314,00 in early June. However, continued claims are tracking well below the comparable period in ’21. This suggests it takes marginally longer for laid-off workers to find employment now than in the summer, but less time than it did late in ’21.

The labor market remains tight. The Bureau of Labor Statistics (BLS) reports there were 10.5 million job openings on the last business day of November. That’s an improvement from the peak of 11.9 in March ’22 but still above the 6.9 million in November ’19 prior to the pandemic. Nearly 4.2 million workers quit their jobs in November, somewhat above the 3.5 million in November ’19. The high level of quits suggests workers are more easily finding better pay or working conditions with other employers, or they’re confident they will have little difficulty doing so. The strong labor market is one factor driving inflation and influencing the Federal Reserve to continue raising interest rates. 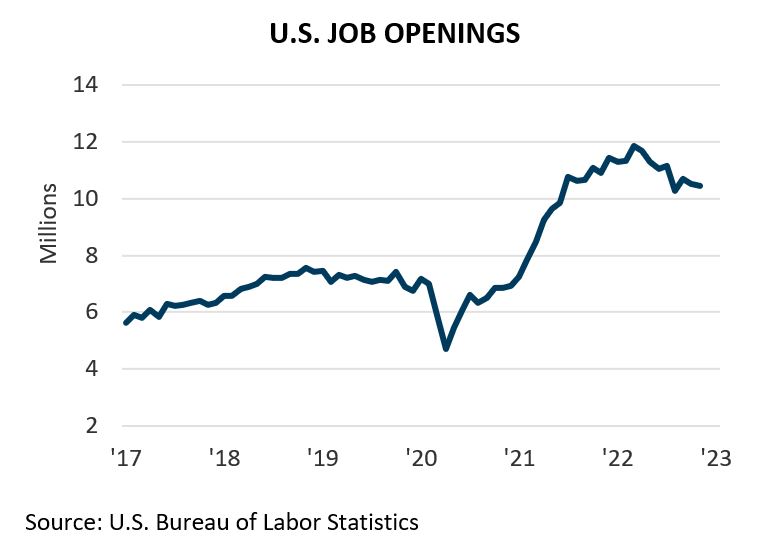 Here are the facts to know about the Houston region this month
1
January Takeaway #1
The nation created 223,000 jobs in December, bringing overall growth for ’22 to 4.5 million jobs.
2
January Takeaway #2
Houston’s GDP hit $537.1 billion in ’21.
3
January Takeaway #3
Houston accounted for 9.6 percent of the nation’s exports during the first nine months of ’22, exceeding that of any other U.S. metro.
Like this article? Share with your network